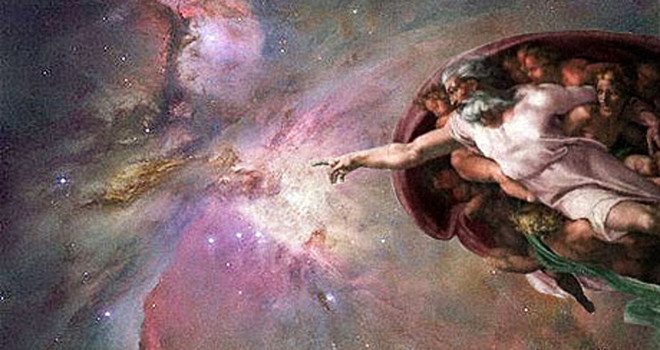 For example you get a new car, and now you notice that same type of car on the road with a much greater frequency than you had noticed before. But though confirmation bias generally refers to the inclusion or exclusion of data, there are other ways we can shoehorn the obvious to make it fit within our world view.

[In 2015] in The Atlantic, Matthew Hutson wrote a fascinating article, “The Science of Superstition: No One Is Immune to Magical Thinking.” Actually as an article it’s really not that fascinating, but as an illustration of the mental contortions one must make to defend atheism, it is Olympic.

Hutson cited a number of studies that demonstrated that “…even physicists, chemists and geologists at MIT and other elite schools were instinctively inclined to attach a purpose to natural events.” Hutson illustrates the point through research that subjected scientists to time pressure, thereby getting a more honest, reflexive response to questions rather than a response filtered through reflection and vetted for consistency with conscious beliefs. They were asked whether they approved of statements, such as, “Trees produce oxygen so that animals can breathe.” When asked under time pressure, scientists were twice as likely to approve of such statements.

To say that plants produce oxygen for the purpose of supplying animals would imply design, and therefore God.

Of course modern theories about the evolution of plants and animals posit that the capacity of plants to produce oxygen is merely an accident that just so happens to facilitate the breathing of animals. To say that plants produce oxygen for the purpose of supplying animals would imply design, and therefore God. Physicists, chemists and geologists are very familiar with this reasoning, and yet with a high frequency they assented to statements that placed things within an ordered framework and were implicitly teleological. For Hutson this demonstrates the persistence of “magical thinking.” Here were scientists, most of whom were decidedly non-religious, assenting to statements that implied an architectonic and therefore religious framework.

Skeptics call this patternicity, projecting a pattern where there is none. But for religious thinkers, the persistence of this type of thinking in non-religious scientists is evidence not of a logical lapse, but, of irrepressible natural faith. C.S. Lewis famously said that when he was an atheist he did not believe in God, and he was angry at God for not existing. In his inimitably ironic way, Lewis pointed to the fact that there really are no such things as atheists.

Fr. Robert Barron addresses the common misconceptions about the nature of God that lead so many who worship at the altar of science to deny God exists. According to Fr. Barron, the atheist critique hinges on their mistaken understanding of God as “the supreme instance of the category of being.” Citing St. Thomas Aquinas, Barron argues that this is exactly what God is not. Rather God is ipsum esse subsitens, that is, the subsistent act of being itself. “The sciences in principle cannot eliminate God, because God is not some phenomena in the world.”

Scientists and those who consider themselves atheists confine themselves to the material realm which is measurable and testable and are rightly proud of all that has been achieved in that realm, but even the most obstinate materialist cannot help but hear the echoes of truths from beyond the particular and contingent. As Fr. Barron says: “We are constantly struck by the contingency of things (their coming into being and their passing away), but we also have a deep sense of their rootedness in BEING. That’s God. The non-contingent ground of Being.”

But for Hutson and others who are perplexed at the dogged persistence of “magical thinking,” it gets worse. Hutson cites studies that show the persistent belief in God is not merely understood as some distant Deistic First Cause but, rather, of a God who cares, a God who judges and a God who might punish. Deep in our bones we are intrinsically theistic. He writes, “Even atheists seem to fear a higher power. A study published last year found that self-identified nonbelievers began to sweat when reading aloud sentences asking God to do terrible things (‘I dare God to make my parents drown’). Not only that, they stressed out just as much as believers did.”

Even atheists seem to fear a higher power.

Further, our revulsion at evil befalling our parents is not merely because they are ours, that is, because it would be unpleasant for us to have them experience evil. Rather, we are, all of us, offended by evil befalling the innocent because we have an innate sense of natural law, of good and bad, right and wrong, that echoes through all that is. We are intensely aware of either harmony or discord with truths far beyond human construction or patternicity, and the ubiquity and immutable persistence of these truths is why atheists must be so cranky and belligerent.

Friedrich Nietzsche railed against the persistent interconnectedness between natural law and belief in God and called for a transvaluation of values. He said essentially that the only way one could be free from belief in God was by identifying all the ethics that are derived from Christianity and turning them upside down—doing the opposite. But the world is forever made new by Christ, and so even for the scientist who plugs his spiritual ears and winces shut his spiritual eyes the leaven of natural law can no more be avoided than can the warmth and light of the sun.

The truth is that there are no such things as atheists.

When C.S. Lewis finally made the assent of faith, he wrote that he was perhaps the most miserable convert in all of England. The result was a life’s worth of confirmation bias thrown on the scrapheap. He simply could not resist God’s love. Lewis, of course, was an Oxford Don, an intellectual not unlike Hutson’s scientists from MIT and elsewhere, and like them, he was lost in his one-dimensional intellectual constructs.

But these MIT scientists, like Lewis, are met at every turn by the serene truth of God’s existence. In the deeper rumblings of their very selves, where nature speaks through instinct and God speaks through conscience, there are eternal truths that can be avoided for a time but not ultimately denied. The truth is that there are no such things as atheists.