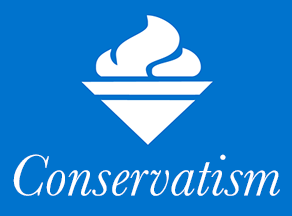 by Alfred Regnery –
The basic foundations of American conservatism consist of liberty and freedom, tradition and order, rule of law, and belief in God.

Over the past half century, conservatism has become the dominant political philosophy in the United States. Newspaper and television political news stories more often than not will mention the word conservative. Almost every Republican running for office—whether for school board or U.S. senator—will try to establish his place on the political spectrum based on how conservative he is. Even Democrats sometimes distinguish among members of their own party in terms of conservatism.

Although conservatism as we know it today is a relatively new movement—it emerged after World War II and only became a political force in the 1960s—it is based on ideas that are as old as Western civilization itself. The intellectual foundations on which this movement has been built stretch back to antiquity, were further developed during the Middle Ages and in eighteenth- and nineteenth-century England, and were ultimately formulated into a coherent political philosophy at the time of the founding of the United States. In a real sense, conservatism is Western civilization.

The basic foundations of American conservatism can be boiled down to four fundamental concepts. We might call them the four pillars of modern conservatism:

The first pillar of conservatism is Liberty, or Freedom.
Conservatives believe that individuals possess the right to life, liberty, and property, and freedom from the restrictions of arbitrary force. They exercise these rights through the use of their natural free will. That means the ability to follow your own dreams, to do what you want to (so long as you don’t harm others) and reap the rewards (or face the penalties). Above all, it means freedom from oppression by government—and the protection of government against oppression. It means political liberty, the freedom to speak your mind on matters of public policy. It means religious liberty—to worship as you please, or not to worship at all. It also means economic liberty, the freedom to own property and to allocate your own resources in a free market.

Conservatism is based on the idea that the pursuit of virtue is the purpose of our existence and that liberty is an essential component of the pursuit of virtue. Adherence to virtue is also a necessary condition of the pursuit of freedom. In other words, freedom must be pursued for the common good, and when it is abused for the benefit of one group at the expense of others, such abuse must be checked. Still, confronted with a choice of more security or more liberty, conservatives will usually opt for more liberty.

The second pillar of conservative philosophy is Tradition and Order.
Conservatism is also about conserving the values that have been established over centuries and that have led to an orderly society. Conservatives believe in human nature; they believe in the ability of man to build a society that respects rights and that has the capacity to repel the forces of evil. Order means a systematic and harmonious arrangement, both within one’s own character and within the commonwealth. It signifies the performance of certain duties and the enjoyment of certain rights within a community.

Order is perhaps more easily understood by looking at its opposite: disorder. A disordered existence is a confused and miserable existence. If a society falls into general disorder, many of its members will cease to exist at all. And if the members of a society are disordered in spirit, the outward order of society cannot long endure. Disorder describes well everything that conservatism is not.

The third pillar is the Rule of Law.
Conservatism is based on the belief that it is crucial to have a legal system that is predictable, that allows people to know what the rules are and enforce those rules equally for all. This means that both governors and the governed are subject to the law. The rule of law promotes prosperity and protects liberty. Put simply, a government of laws and not of men is the only way to secure justice.

The fourth pillar is Belief in God.
Belief in God means adherence to the broad concepts of religious faith—such things as justice, virtue, fairness, charity, community, and duty. These are the concepts on which conservatives base their philosophy.

Each of the four pillars is closely related to all the others. Liberty, for example, is considered a gift of God and must be protected by the rule of law. The rule of law itself is dependent on the natural law—a transcendent law reflected in every orderly and civilized society, demarcating good and evil. Tradition and order are best reflected by our common law—a law developed over centuries by reasonable people in their everyday lives, which sets the rules for social order consistent with the past. And tradition is an important dimension of belief in God. What could demonstrate tradition and order more fully, for example, than the Old Testament and the history of the Jewish people, or the doctrines of the Christian Church?

Excerpts from: The Imaginative Conservative