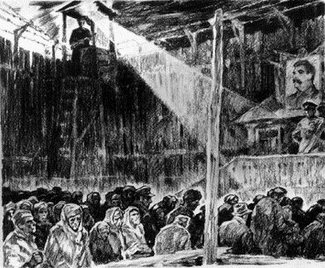 by Joseph Pearce –
Guillotine, Gulag, and Gas Chamber. These are the glorious gifts that atheism has bestowed on a world grown tired of God.

There are lies, damned lies, and neo-atheist polemics. One of the most egregious examples of such godless mendacity is the claim that religion has been the cause of most of the wars that have blighted humanity throughout its blood-stained history. In a world with “no religion”, so the argument runs, there would be “nothing to kill or die for”. Such nonsense is only believable if we remain willfully ignorant of the lessons of history.

Almost all wars have been the consequence of human selfishness (a synonym for godlessness) and have been carried out according to the principles of that proto-secularist and incorrigible atheist, Nicolo Machiavelli. Although secular rulers have sometimes used religion as an ethical and ultimately ethereal veneer to justify their actions, war has almost always been the consequence of Machiavellian realpolitik. This includes the so-called wars of religion, most of which were fought by power-hungry princes eager to impose their egocentric wills on their neighbours.

Yet even were one to accept an element of religious culpability in the wars that ravaged Christendom, such culpability pales into relative insignificance when compared to the terror carried out in the name of atheism.

The first great atheist uprising was the French Revolution, which sought to dethrone God with godless “Reason”

The first great atheist uprising was the French Revolution, which sought to dethrone God with godless “Reason” and sought to replace the Holy Trinity with the atheist trinity of liberté, egalité et fraternité. The man who is traditionally attributed with coining this triune revolutionary war-cry, which would later be officially adopted as the motto of the French Republic, was Antoine-Francois Momoro, a rabidly anti-Christian radical who advocated the eradication of religion. He played an active and bloodthirsty role in the crushing of the Catholic peasants of the Vendée and was a key figure in the notorious Cult of Reason, an anthropocentric alternative to religion, which effectively enthroned self-worshipping Man as the Lord of the “enlightened” cosmos. In 1793, Momoro supervised the nationally celebrated Fête de la Raison (Festival of Reason) in which his own wife was dressed and paraded as the Goddess of Reason, surrounded by cavorting and costumed women. In a wild and licentious liturgical dance, the Goddess of Reason processed down the aisle of Notre Dame Cathedral in Paris, surrounded by her female entourage, to a newly-installed altar to Liberty, the Christian altar having been desecrated and removed. All across France, Christian churches were desecrated and re-established as Temples of Reason.

The Cult of Reason metamorphosed into the Reign of Terror

The Cult of Reason metamorphosed into the Reign of Terror in which the streets of Paris literally ran red with the blood of its victims. The Goddess of Reason made way for Madame Guillotine who was omnivorous in her bloodlustful appetite, devouring Christians and atheists alike.

A little over four months after Momoro’s triumphalist Fête de la Raison, Momoro was himself a victim of the Reign of Terror that he had helped to create. Accused by his erstwhile comrades of being an enemy of the revolution, he was guillotined on March 24, 1794, a timely reminder of the words of the French political journalist, Jacques Mallet du Pan, that “the Revolution devours its own children”.

Having experienced this incestuously cannibalistic debauch, any genuine age of reason would have rejected atheism’s Cult of Reason and sought more humane ways of solving the problems of modernity. Not so. The nineteenth century saw a plethora or revolutions, inspired by atheism and anti-clericalism, which paved the way for the Russian Revolution of 1917, a godless monstrosity that would dwarf even the Reign of Terror in the sheer scale of the secular fundamentalist horror that it unleashed. Throughout the Soviet Union, thousands of labour camps were established in which political dissidents, enemies of the State, were literally worked to death. This system of camps, dubbed by Solzhenitsyn the Gulag Archipelago, would claim tens of millions of lives before the communist tyranny finally crumbled under the dead weight of its own corruption.

Guillotine, Gulag, and Gas Chamber. These are the glorious gifts that atheism has bestowed on a world grown tired of God.

Meanwhile, in Germany, another form of Socialism, both anti-Christian and anti-Semitic in inspiration, ushered in a period of genocide, adding the ghastliness of the Gas Chamber to atheism’s legacy of mass destruction.

Guillotine, Gulag, and Gas Chamber. These are the glorious gifts that atheism has bestowed on a world grown tired of God. Such gruesome realities should come to mind whenever we hear the new generation of atheists asking us to imagine that “there’s no heaven; no hell below us; above us only sky”. Where there’s no heaven, there is only hell. And if we won’t have hell below us, we must have it with us and within us, and also above us, in the form of the hell of political atheism that crushes us underfoot in the name of “reason”.