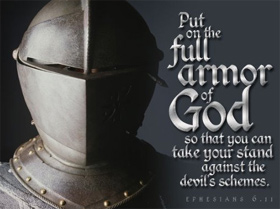 by Fr James Parnell –
Throughout his letters, St. Paul stresses a sense of urgency and vigilance that we have long since lost. This emphasis is based on the reality of a conflict described plainly as a war against evil. It can even seem foreign to us, as it is spoken of in terms far different from the culture wars in which the sins of others become the targets for our Bible bombs and canonical cannons.

No, the conflict he most often references is not that of public conflict with other groups/individuals, but of spiritual conflict. Even conflicts related to those who preached other doctrines (focus on circumcision, spiritual gifts, etc.) are viewed as but a manifestation and example of a spiritual reality:

“For though we live in the world we are not carrying on a worldly war, for the weapons of our warfare are not worldly but have divine power to destroy strongholds. We destroy arguments and every proud obstacle to the knowledge of God, and take every thought captive to obey Christ, being ready to punish every disobedience, when your obedience is complete.” [1]

In this vein, his letters are filled with military and athletic references which help illustrate his focus on preparing his flock for a contest, a war. St. Paul minces no words when describing the imminence and regularity of conflict, both with the world and within oneself. He twice describes the life of a Christian as “a good fight,” and speaks at length of a war within himself.[2] The snares of the devil and the powers of evil are not conjured up as a metaphysical metaphor or scare-straight-tactic, but spoken of as a reality of warfare.

St. Paul’s famous encouragement to arm oneself with spiritual armor and weaponry is expressly based on the real threat of engagement by the enemy.[3] In Ephesians, it’s not described as a possibility, but rather a promise. Indeed, the conflict within this world between good and evil is realized in the expectation of suffering. “For it has been granted to you that for the sake of Christ you should not only believe in him but also suffer for his sake, engaged in the same conflict which you saw and now hear to be mine.”[4] Suffering as a Christian is not simply an occupational hazard, but rather a job description. Yet we are not called to do so in a masochistic way, seeking humiliation and abuse for the fun of it. It is an expectation that a life lived in Christ is one which naturally comes to a point of intersection with a death like Christ’s, even if, in America, it is not with wood and nails.

“When we cry, “Abba! Father!” it is the Spirit himself bearing witness with our spirit that we are children of God, and if children, then heirs, heirs of God and fellow heirs with Christ, provided we suffer with him in order that we may also be glorified with him. I consider that the sufferings of this present time are not worth comparing with the glory that is to be revealed to us.” [5]

Yet as Christians in America, we often take one of two paths to excess when it comes to “spiritual warfare.” One is abuse and the other is apathy.

Culture wars and Christianity can often seem synonymous in popular media. Pope Francis is quoted as saying, “Who am I to judge?” and the papers are ablaze with wonderment that a Christian leader might dare to withhold from judging another person. Imagine it … a Christian who doesn’t point the finger at someone else over their sins. Pick your hot topic, and there’s a “Christian” group that sounds more like a hate group than a light on a hill. We take the conflict that Paul describes and use it as fodder for war against flesh and blood, under the guise of protecting the faith or fatherland. Yet, despite the media hype, the majority of us probably feel more comfortable on the sidelines, just slightly outside the danger area, away from the main push of the battle. We wait for the end, if we even take notice of it at all, and when pushed to suit up and wade into the thick of it, or perhaps simply when jostled by another running to fight, we ask, like the demoniacs from the Gospel a few weeks ago: “Have you come to torment us before the time?” We perhaps know too well who the victor will be and feel no need to risk our own skin.

We can take comfort and rejoice in the fact that Christ trampled down death by his death, that he won the victory already, and indeed St. Paul encourages us to do exactly that. Yet, though the victory has been won, the fight drones on, for the enemy still fights as though he doesn’t know he’s beaten. We, as Christians, as the Church, the Body of Christ, are called to be that reality: to embody Christ today, here and now, and make that victory a reality in our lives today, and in the lives of those around us. We are here to fight the good fight and it is for this reason that Paul speaks of his own suffering for the Gospel.[6]

Yet for many of us, there’s just too much going on. With timelines and hash tags, memes and viral videos, 24-hour news channels and up-to-the-minute as-fast-as-you-can-share-it information at our fingertips, it can be hard not to get caught up in it all. There’s a sense that we must keep up with the ever-changing, as though the news is always new and newsworthy. Those things that seem to us to remain the same: stagnant, still, and steadfast, these are often put on hold, ignored, in order to focus on that which seems different: the new, changing, and constantly updated, globalized world. The temptation to check your e-mail instead of praying in the morning, to read the news feed instead of the Bible, to attend a social event instead of Vespers, or update your social media persona instead of visiting the sick is so powerful exactly for this reason. We know that the prayer book, the Bible, the services of the Church, and those in need will still be there tomorrow.

We take God for granted and, at best, assume that we’ll have time to get to it later, once everything slows down. Yet, they never seem to, and we are stuck in a Groundhog Day scenario of never quite making time for that which time was made. Before we know it, the enemy has won a small victory in the battlefield of our hearts. Our senses are deadened to the realities of God working in our lives, of Christ in our midst. We become at ease in our sins and at peace with our spiritual laziness. We take a rest. We begin to doze off.