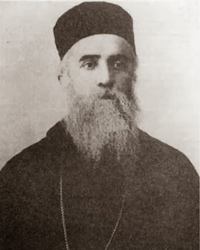 by St. Nektarios of Aegina –
Atheism is a mental disorder: it is a terrible ailment of the soul that is difficult to cure. Atheism is a passion that severely oppresses whomever it seizes. It holds in store many misfortunes for its captive, and becomes harmful not only for him but also for others who come into contact with him.

Atheism denies the existence of God. It denies that there is a divine Creator of the universe. It denies God’s providence, His wisdom, His goodness, and, in general, His divine qualities. Atheism teaches a falsehood to its followers and contrives false theories concerning the creation of the universe. It professes, as Pythia upon a tripod,1 that the creation is an outcome of chance, that it is perpetuated and preserved through purposeless, random interactions, that its splendor transpired spontaneously over time, and that the harmony, grace, and beauty witnessed in nature are inherent attributes of natural laws.

Atheism detracts from God, Whom it has denied, His divine characteristics, and, instead, bestows them and His creative power to lifeless and feeble matter. Atheism freely proclaims matter to be the cause of all things, and it deifies matter in order to deny the existence of a superior Being, of a supreme, creative Spirit Who cares for and sustains all things.

On account of disbelief, matter becomes the only true entity; whereas the spirit becomes non-existent. For atheism, the spirit and the soul are egotistical inventions of man, concocted to satisfy his vainglory. Atheism denies man’s spiritual nature. It drags man down from the lofty height where he has been placed by the Creator’s power and grace, and lowers him amongst the rank of irrational animals, which he accepts as ancestors of his distinguished and noble lineage. Atheism does all this in order to bear witness to the words of the Psalm: “Man, being in honor, did not understand; he is compared to the mindless animals, and is become like unto them” (Ps. 48:20).

Atheism detracts faith, hope, and love from the world, these life-giving sources of true happiness for man, it expels God’s righteousness from the world, and denies the existence of God’s providence and succor.

Atheism accepts the laws that exist in nature, yet denies Him Who has appointed these laws. Atheism seeks to lead man to an imaginary happiness; however, it abandons and deserts him in the middle of nowhere, in the valley of lamentation, barren of all heavenly goods, void of consolation from above, empty of spiritual strength, bereft of the power of moral virtue, and stripped of the only indispensable provisions upon the earth: faith, hope, and love.

Atheism condemns poor man to perdition and leaves him standing alone as prey amidst life’s difficulties. Having removed love from within man, atheism subsequently deprives him of the love from others, and it isolates him from family, relatives, and friends. Atheism displaces any hope of a better future and replaces it with despair.

Atheism is awful! It is the worst of all spiritual illnesses!

1 This tripod was a bronze altar at Delphi, in ancient Greece, upon which the priestess of Apollo named Pythia sat to utter oracles.