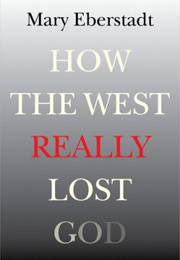 by Elise Hilton –
On Christmas Eve 2011, I opened our front door to find one of my teenage daughter’s friends, sobbing. Her parents had divorced months before, and her dad wasn’t around. Her mother started bringing men home regularly to spend the night. The girl told her mom that having the men around made her feel uncomfortable. Her mom kicked her out of the house. On Christmas Eve.

This could be a single story of one young girl and the fall-out of one divorce, but it’s not. It’s becoming Our American Story: adults who do as they wish with little regard for the child, divorce, cohabitation, children with a revolving door of adults in their lives, no longer a family but a group of people with tenuous ties to each other, their community, their faith.

There are plenty of statistics that bear out that this American Story is the norm (the CDC report hereand a report from the Institute of American Values here.) How did it become Our Story?

Mary Eberstadt takes on the tangled threads of faith and family in How the West Really Lost God: A New Theory of Secularization (Templeton Press, 2013). Despite the title, it’s not simply a book about religion (or lack thereof); Eberstadt makes it clear that faith and family are undeniably linked. She uses the visual of the DNA double-helix strand: religious commitment and participation as one strand, strong and healthy families as the other, with ladder-like bars holding the two together. With the collapse of one, she argues, the inevitable happens: the breakdown of the other..

It’s a chicken-or-the-egg riddle, whether the disintegration of the family came first or the collapse of traditional Christian faith did. (For the purposes of this book, Eberstadt focuses solely on Christianity, since she is concerned here with Western culture.) Too closely intertwined to make a call, Eberstadt does pin a date on the collapse of this double helix: 1960.

Why 1960? Why did God stop mattering at that point? Why did the family falter?

The underlying and underappreciated quantum leap toward irreligiosity in the 1960s, one can argue, owed most of its force to the approval in 1960 of the birth control pill, which would change relations between the sexes – that is to say, with the natural family – as never before.

Whether one “likes” the Pill or not, Eberstadt is firm: the Pill and the associated sexual revolution are the “linchpin of change in Western religiosity.” What’s the fall-out? Fewer marriages, fewer children, fewer children growing up in intact (biological parents married to each other) homes.

How does this affect Christianity? Eberstadt argues that the collapse of the traditional family is an “unseen engine of secularization”: People don’t like to be told they are doing something wrong. If you go to church on Sunday and hear a sermon condemning cohabitation or artificial birth control – which you practice – you’re probably going to be unhappy. Maybe you won’t go back. Eberstadt points out that Christianity has a message – core precepts that it is compelled to teach. The more people in “broken and frayed homes” take offense to traditional Christian teaching, the less likely they are to transmit the faith to the next generation, the very faith that helps hold families together, Eberstadt argues. The two strands of the double helix continue to unravel.

Didi Martinez, a young journalist makes a telling plea in a piece called “A Millenial’s Appeal To Parents”:

“So what?” one might say. If folks want to live together, have kids with multiple partners and not go to church, why should we care? Why should we care, as Didi Martinez puts it, that we have a “hurting generation” on our hands? If we are interested in a healthy society, where children are given the best opportunity to flourish, know a sense of place and purpose, we must care. Philosophy instructor at Calvin College, James K.A. Smith, says this:

A healthy, flourishing society depends on structures and institutions beyond the state. Even the economic life of a nation cannot be adequately (or justly) fostered by just a couple of “spheres” (as Abraham Kuyper called them) like the market and/or government. Societal health requires a robust, thriving civil society, with all kinds of “little platoons” working creatively and in common, without being managed by the apparatus of government or constantly seeking the permission of the state.

Opportunity, for example, requires the foundation of a home and family that provide security, support, and an education in virtue…

In short, if our society wants to foster upward mobility and economic stability—the good features of the American dream—then we need to call into question the dogmas of secularist progressivism.

Eberstadt’s thesis is plain: The success of Christianity relies on the success of the traditional, nuclear family and vice versa. While we must acknowledge the many single parents who are striving under difficult circumstances to live their faith and raise their children well, we must also recognize we are in a calamitous state, affecting not only family and faith, but also the economy, the culture, politics: society itself.

Eberstadt, in her book’s notes, reminds the reader that from Genesis to the Pauline letters, marriage is meant to be a fruitful and protected state. She speculates that the Judeo-Christian call to protect family and marriage is also a way to protect society at large. To “be fruitful and multiply” (Gen. 1:28) is a rejoinder not just for family life, but all of culture.

Do we care? I know one person who does. The girl on my doorstep, sobbing over the fact that her mother chose a succession of men over her on a cold Christmas Eve.