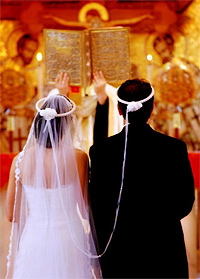 by Fr. Alexander Schmemann –
We can now return to the sacrament of matrimony. We can now understand that its true meaning is not that it merely gives a religious “sanction” to marriage and family life, reinforces with supernatural grace the natural family virtues. Its meaning is that by taking the “natural” marriage into “the great mystery of Christ and the Church,” the sacrament of matrimony gives marriage a new meaning; it transforms, in fact, not only marriage as such but all human love.

It is worth mentioning that the early Church apparently did not know of any separate marriage service. The “fulfillment” of marriage by two Christians was their partaking of the Eucharist. As every aspect of life was gathered into the Eucharist, so matrimony received its seal by inclusion into the central act of the community. And this means that, since marriage has always had sociological and legal dimensions, there were simply accepted by the Church.

Yet, like the whole “natural” life of man, marriage had to be taken into the Church, that is, judged, redeemed and transformed into the sacrament of the Kingdom. Only later did the Church receive also the “civil” authority to perform a rite of marriage. This meant, however, together with the recognition of the Church as the “celebrant” of matrimony, a first step in a progressive “desacramentalization.” An obvious sign of this was the divorce of matrimony from the Eucharist.

All this explains why even today the Orthodox rite of matrimony consists of two distinct services: the Betrothal and the Crowning. The Betrothal is performed not inside the Church, but in the vestibule. It is the Christian form of the “natural” marriage. It is the blessing of the rings by the priest and their exchange by the bridal pair. Yet from the very beginning this natural marriage is given its true perspective and direction: “O Lord our God,” says the priest, “who hast espoused the Church as a pure Virgin from among the Gentiles, bless this Betrothal, and unite and maintain these Thy servants in peace and oneness of mind.”

For the Christian, natural does not mean either self-sufficient – a “nice little family” – or merely insufficient, and to be, therefore, strengthened and completed by the addition of the “supernatural.” The natural man thirsts and hungers for fulfillment and redemption. This thirst and hunger is the vestibule of the Kingdom: both beginning and exile.

Then, having blessed the natural marriage, the priest takes the bridal pair in a solemn procession into the church. This is the true form of the sacrament, for it does not merely symbolize, but indeed is the entrance of marriage into the Church, which is the entrance of the world into the “world to come,” the procession of the people of God – in Christ – into the Kingdom. The rite of crowning is but a later – although a beautiful and beautifully meaningful – expression of the reality of this entrance.