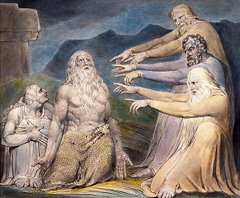 by Deacon Keith Fournier –
One of the most profound of biblical characters is the man named Job. The book which bears his name is rich with insights about real life. It is profound, disturbing, and yet incredibly helpful precisely because it reveals something of importance. Things aren’t always the way they seem – or feel.

This is a troubling and difficult time for many people. Over and over again, I hear the sad stories of financial setback as the U.S. economy struggles. People are watching their retirement funds, their homes and their savings, seem to vanish. When we look around us it seems our culture is in collapse as it rejects the moral foundations of a free society.

I have seen an increase in serious illness in the lives of good people whom I love. I -and those whom I love the most – have had relational, emotional and physical struggles on almost every front. Sound familiar? Let’s be honest. Life is often difficult. That is the case even when you are praying and being as faithful as you can to Lord and His Church.

Pain just seems to be a part of the program. The real question is what do we do with it.

Recently, one of my dearest friends experienced betrayal at the hands of someone in whom he had placed a great deal of trust. He is struggling with sorting it all out and experiencing one of the worst kinds of suffering, betrayal. I can only listen to his pain, pray with and for him, and tell him I understand.

It does not take the pain or disillusionment away.

I have experienced my share of fair-weather friends in my life. You know the kind that I mean. They are there with you when everything is flourishing, claiming they have your back. They love to be there in the picture with you, smiling and enjoying identification with someone who is perceived as successful, whether it is on the financial, career or even the spiritual front.

However, when the storms come and the leaves begin to fall, when the difficulties of life throw a proverbial wrench in the works, they are quickly gone, having dropped you, as they say, like a bad habit. However, in my later years, I have begun to understand there is an even worse kind of false friend.

Friends of Job
These are the ones I refer to as the friends of Job. I believe that most of us have experienced them. The sooner we come to understand the danger that their false posturing poses, the happier we will all be. These are the folks who claim to have somehow figured God all out – as though the Christian life were some kind of puzzle – and they are very willing to tell you why things are not going easily in your life.

They often act as though following the Lord Jesus Christ involves living out a formula. They fail to speak of the fact that those who embrace His way will walk, as He did, along a rugged road. After all, we follow in the footsteps of a Savior who, in His greatest act of Love, His self giving embrace of death on a Cross, was deemed by most who witnessed it to be His complete failure. These friends of Job are quick to wrongly judge when difficulties come into the lives of good people, as they inevitably will.

These friends of Job seem to be everywhere these days. Sadly, some even occupy the pulpits of some of America’s fastest growing churches in certain Christian communities. They fill the airwaves with claims of health, wealth, prosperity and blessing for those who really -get- the Gospel, at least the Gospel they preach. Sometimes, what they are preaching is what St Paul warned of as – another gospel – (Gal. 1:6), one which reduces our walk with God to following a formula.

The background of the Book is a dispute between Satan, whom the New Testament rightly refers to as the accuser of the brethren (Rev. 12:10), and God. Satan contends that Job served God for what He got from Him not for who God is. How rampant is this kind of self interested service of God in some of the Christian circles in our own time? How many self styled teachers seek to reduce Christian living to formulas?

At the beginning of this book we find the mystery of true faith, authentic spirituality. After his own wife told him to -curse God and die- Job spoke these words of caution and then wisdom to her, – Are even you going to speak as senseless women do? We accept good things from God; and should we not accept evil? (Job 2:10)

Later, in the midst of his discourse with three friends, he added the following acclamation which gets to the heart of the mettle of this man named Job, -even if he slay me, I will hope in Him. (Job 13:15)

These words were spoken to the self professed experts who had come to tell him how he could get out of the mess if he just followed their formulaic approach to religious living. These words need to be shouted in some places in our own day. Job was fully surrendered to God. He refused to turn God into an object for His own use. He grasped the true mystery of a faith that really saves.

When we first encounter the friends of Job at the beginning of the Book they seem empathetic, tearing their cloaks, weeping and even spending a week with him in his anguish. But, their feigned compassion ends all too soon. They have something to tell Job, that is why they really came to be with him. They were not compassionate, in the Biblical sense. The ancient words in Hebrew and Greek translated as compassion in English mean to suffer with.

They had no interest in entering into Jobs pain but in blaming him and his behavior for it. After all, they had this whole faith thing figured out and they were going to enlighten him with their higher knowledge. Sound familiar? Perhaps in contemporary circles they would have given him the latest teaching from their superstar pastor or the new speaker making the circuit who had it all figured out, along with some formulaic use of bible texts to prove their point.

Or, perhaps they would have given him the latest popular book from the local Christian book store promising that if he just followed these seven, or eight or even twelve steps, all the pain would go away. After all, Jobs life was a mess, right? He was obviously not really living for God or he would not be suffering or abandoned. Right?

Wearisome Comforters
These -wearisome comforters- (Job 16:2-4), as Job later calls them, reveal their true agendas in their errant assessment of Jobs suffering and their false recommendations for his deliverance from them. They think they have the answer for life’s deepest mystery, suffering. They do not. No one does. In their counterfeit answers we find one of the greatest dangers to authentic faith.

These false teachings are still wreaking havoc in too many lives.

In response to their long winded discourse, Job tells them all to be to be silent because they are -uttering falsehoods- and offering -vain remedies. So, in our day, the self appointed guardians of the formulas are still wrong.

Oh, for the voice of a Job in some of our contemporary Christian communities. Enough of the formulas, the claims to hidden knowledge (a new form of Gnosticism) and the claims of being able to manipulate the power of God to achieve our own ends (a new kind of simony). The byways are filled with wounded people who have suffered as a result of such poor teaching.

Let’s look at their explanations of Jobs difficulties for a moment. I know they will sound familiar to you. Elephaz the Temanite tells Job that God is mad at Him (Job 5). Bildad the Shuhite tells Job that his misfortunes are his own fault. (Job 8). Finally, Zophar the Naamathite tells Job that he is being punished. (Job 11). All of them were wrong then – and their spiritual descendants are just as wrong today.

Love God for God’s Sake
Job was right. In fact, he was living in the heart of God’s will. When Job was stripped of what his fairweather friends believed were the -proofs- of Gods favor, he found the greatest treasure of all, the beautiful poverty of purified Love. He found the richness reserved for those who love God for God’s sake. Jobs fairweather friends told him that his loss and difficulties were his fault, but Job knew better. In his unwavering hope in God’s love and mercy we find the way of purified, living faith.

In sincere contrition, Job acknowledged in a profound dialogue with God that he simply did not understand His mind on these kinds of matters. He repented for his lack of trust and even interceded for these fairweather friends who had wrongly accused him (Job 42:8). After Job had prayed for his friends, the Lord again made him prosperous. Oh, there was quite an encounter between Job and the Lord. It is well worth reading.

Job showed his humility and the Lord restored him after strongly, but lovingly, instructing him. His brothers, sisters and those who knew him before the struggles came and dined with him. The Lord gave him double what he had lost; fourteen thousand sheep, six thousand camels, a thousand yoke of oxen and a thousand donkeys. He had seven sons, three daughters and lived a hundred and forty years. He saw his children and his grandchildren to the fourth generation.

Real Faith is God’s Gift
The greatest gift that God gave to Job was real, purified faith. God answered Jobs’ sincere, heartfelt prayer for insight into his struggles when He spoke to him -out of a storm (Job 38). That’s right, God was right there in that storm! He always is. He always turns the difficulties, struggles, pain, betrayals, loss in each of our lives to good, as St Paul would centuries later remind the early Christians (Romans 8:28).

This stormy encounter between Job and God is reminiscent of another storm, the one we read about in the New Testament on the Sea of Galilee. There, the disciples were with God Incarnate, Jesus Christ in a boat (Matthew 8: 23-27). He was asleep. Terrified, they woke Him and He calmed the storm. In His sacred humanity, asleep in that boat, he showed them an important truth they would later come to grasp as they lived their lives as witnesses for Jesus Christ.

He was already there, right in the storm, they just needed to trust and rest in Him. In Jesus Christ, this God of Job came among us in the flesh. In His sacred humanity He reveals the way to live free of fear, even in the midst of the struggles and storms of life. He emptied Himself out of perfect love for the whole human race.

Jesus still seeks men and women who will love in that same way, following Him along His Way and not their own. He calls them the poor in spirit and gives them His kingdom. These are the ones who really know how to love and how to live. They do not love for a return but love for Loves’ sake.

Job did not follow God because He was so good to him, but because He is God. So should we. When we encounter the inevitability of loss, suffering, difficulties and persecution in our lives, as we certainly will, we must always beware of the fairweather friends of Job. We must also choose to follow the One who never sleeps nor slumbers.