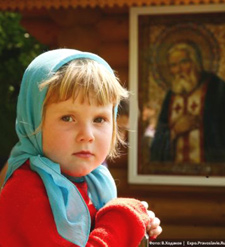 by Evgeny Poselyanin –
There are children who have strong faith despite their parents’ disbelief in, even hostility towards religion. The beauty and order of the universe awakens faith in them, as it did in Great Martyr Barbara.

The writer and New Martyr Evgeny Poselyanin (his real surname was Pogozhin, 1870–1931) reflects upon the teaching of faith to children in his book, Faith, and the Path to Faith.

Such a mind [as Great Martyr Barbaras’] arrives on its own at an inevitable faith in the Creator and Caring Provider of all that exists.

Then, a person with a lively and deep mind and a nature distinguished by a sense of justice finds it necessary to investigate those strange attacks on religion, of which he has become a witness. He strives to make sense of it all. And it could be said that other people, who would have remained indifferent to nature in times when religion is not persecuted, turn to it with all their souls during times of persecution.

In others faith must be cultivated, and this cultivation of faith is one of the most important tasks in life.

It is widely known that people of faith are greatly interested in the question of how to pass their faith along to their children. You will even find atheists who are concerned about this.

One well-known French denier of religion would personally take his daughter to catechism classes—apparently in an effort to educate his daughter in the faith that he himself had lost.

One well-to-do woman, a very educated person who considered herself an atheist, organized cafeterias for poor children. Once she related a story concerning this:

“Just imagine—I came to the cafeteria. The children were sitting down to table like lambs, without prayer. I immediately asked them to sing grace. After all, it’s simply out of line…” She then strictly instructed the overseers to make sure that the children never sat down to eat without praying first.

Such indignation from the lips of an “atheist” is rather unexpected.

But that is just it—atheism taken to its final conclusions, to indifference, almost never exists in profound people. Either is it meek and peace-loving, bordering on faith, as it was in this feminine soul, or it is hateful and militant; and hate is only the flip-side of love.

One way or another, these people sense the value that religion has for the soul, the irreplaceable support that it give to people, and they cannot bring themselves to take this treasure away from their close ones.

One mother hired a student teacher in the village for her son, who was sixteen at the time. The student was suitable in every respect, but a very important question had yet to be answered.

“You see,” said the loving mother, “I have brought my son up in the faith and have been able to preserve him from all doubts about it. I would like to know what sort of influence you would have in this aspect.”

“The position you are offering,” answered the honest and decent young man, “suits me in every respect. But I should rather lose this position than hide the truth from you. I myself am not a believer, and I suffer very much from this. Knowing myself how hard it is to live without faith, I of course would not try to shake the boy’s faith in any way. If I should be employed by you, I would take every care to avoid any mention of such matters in your son’s presence.”

This is how anyone who relates to people sympathetically and deeply should view this question. But of course, the child’s soul will not receive much from this careful silence. Positive action is needed.

The primary importance cannot be overemphasized of those first warm and pure impressions of faith, and the influence they can have upon a child’s even barely awakened consciousness.

Before an old icon a lampada burns with a dispassionate, dying flame; an old nanny makes prostration after prostration before the icon; the bells in the local belfry are gently and peacefully ringing.

God’s children are on their way to God’ church…

The bitter frost has drawn fanciful flourishes across the window, but here in the room it is warm, cozy, and pleasant.

This world, this holy calm is something the child may remember many times later in his adult years, and much will become clear in his darkened soul as he remembers it.

I recall one visit to my relatives’ estate.

As I happened to be on business in one ancient town, I remembered that not far from there, about twelve versts distance, my relatives lived in their old family estate house. I sent them a message, they sent me a carriage, and I arrived at their home in the evening.

After looking over the house that was built in the early nineteenth century, with old family portraits on the walls, old furniture and antique dishes, I followed my young hostess into a large room.

“His father was born here,” she said at the threshold, nodding toward her husband.

The deceased old man was not of humble origin, but a well known figure in the history of his native region.

We entered the room.

The spacious room with scrupulously curtained windows was almost empty, as well-maintained nurseries often are. On the table in a metal case with a gilded metal overlay was an icon of the Mother of God of Kazan, and before it a tender flame flickered through the blue glass of a lampada.

“I was blessed at my wedding with this icon of my father’s,” the master of the house said quietly.

In the center of the room stood a cradle with a muslin curtain pulled back. In it was a sleeping infant, sweetly smacking his lips.

It seemed as though the eyes painted on the old icon reached this cradle with their gracious gaze and blessed with their power this new human existence.

This icon united the grandfather and the child, the past and the present, with unseen bonds.

This is the healthy, natural environment that surrounds the child of Christian parents.

And what touching poetry there is in the young mother’s teaching her child to bring his little fingers together and make his first sign of the cross, to pronounce amidst the prattle of his first words the great name of God.

Pity the child whose mother did not teach him to pray, and pity the mother who left this sacred duty to others.

It is remarkable that children never doubt the existence of God. Their barely sparkling consciousness is nevertheless somehow capable of grasping the idea of Divinity.

The Savior’s words, Thou hast hid these things from the wise and prudent, and hast revealed them unto babes (Mt. 11:25, Lk. 10:21) opens a lawful field for drawing very necessary conclusions.

Having begun his religious life early, the infant soul can advance very far in his religious development while yet in infancy. He can contemplate the mysteries in which, for example, the two famous cherubim in the painting, “The Sistine Madonna” by Raphael are engulfed, placed as they are on the boundary between two worlds.

There were incidents in the earlier years of persecution against Christians when babes at the breast were eager to go to torments for Christ together with their parents, and thus they became conscious confessors and martyrs.

Whoever has had the chance to observe the facial expressions of infants who have just received Communion can catch in these basically inexpressive faces an extraordinary mark of holy purity, joy, and concentration…

This feeling that the soul itself has, what it turns itself toward like a sunflower to the sun—all this must be strengthened, cultivated, and deepened in children.

From the very earliest, most tender age, children should be given Holy Communion as often as possible, even every week. Like grafting a wild branch onto a good tree, nothing more readily transforms a soul into a cluster on Christ’s vine than its frequent immersion in Christ’s holiness at His table.

The famous spiritual father and preacher, Archpriest Alexei Petrovich Kolokolov, once told how his spiritual daughter was given in marriage to a titled man who later manifested signs of mental illness. The doctors were afraid that the children would be abnormal.

For his own part, Fr. Alexei offered what he had in his own hands—spiritual medicine. He advised the mother to commune her three boys from that marriage as often as possible from the earliest months of their lives. They all grew up to be healthy and normal men.

Of course, children do not understand various dogmatic nuances, and it is entirely unnecessary to explain these points to them. But a living perception of God must be inculcated in children. The feeling that there is a higher, almighty, most excellent Being, to Whom everything is revealed, Who is always ready to listen to one and respond.

Let the child at first turn to God with his childish, seemingly empty and insignificant requests—this is that simple and sincere faith, that strong faith in Him, which will later acquire a different shade when he matures.

In one of the most fragrant creations of Russian literature, belonging to a man who, unfortunately, later betrayed Christ, in Leo Tolstoy’s “Childhood” and “Youth” there are beautiful descriptions of childish prayer. The boy stands in his robe and prays for papa, for mama, then suddenly starts remembering all the people who are dear to him in his childish little world, then adds quickly a prayer that tomorrow there be good weather so that he could go out and play.

In War and Peace, the brother and sister of the Rostov family remember as adults how as children they prayed for the snow to be turned into sugar, then ran outside into the frosty weather to see if a miracle had happened by their prayers.

Later, when Nicholai Rostov is an officer, he prays one day that God would help him out of a very complicated and burdensome situation. During that same prayer he suddenly receives a letter that unexpectedly settles the problem in the most satisfactory way.

The instinctive prayer of a child with his strange and peculiar requests transforms itself into the conscious prayer of a mature adult.