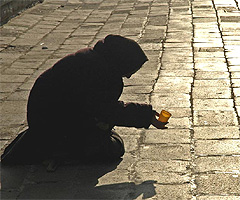 by Joel J. Miller –
When it comes to the question of social justice, there is more at play than the needs of the poor. Charity requires not only a recipient but also a giver, and that increases the issue’s moral complexity.

From the earliest days of the church, care for the poor was central. It’s there in the New Testament writings, in Christ’s own words even. It’s there in the Didache, which directs Christians to spend time with the lowly (3.9) and give their firstfruits to the poor (13.4). And great pastors and preachers like Basil the Great spoke often and forcefully on the matter.

“How many precepts you ignore, since your ears are plugged with avarice!” said Basil in one sermon, adding, “if we all took only what was necessary to satisfy our own needs, giving the rest to those who lack, no one would be rich, no one would be poor, and no one would be in need” (I Will Tear Down My Barns 6, 7).

For Basil, all we have is a gift from God. Any surplus is intended for those in need. We have the privilege and joy of giving it away. Unless, of course, we don’t. And we find a picture of this in the New Testament too.

When Ananias and Sapphira lied about their gift to the church, the Apostle Peter asked, “While it remained [in your possession], was it not your own? And after it was sold, was it not in your own control?” (Acts 5.8)

There are perhaps many angles to explore with this story, but the one that seems to bear on this issue at hand is that Ananias and Sapphira were free to give their possessions. “[W]as it not in your own control?” Peter judged Ananias and Sapphira not for being stingy, but for lying. The gift was theirs, and they could determine what to give.

This introduces the first layer of complexity: What is the disposition of the giver? The surrender of our goods should be voluntary, not compulsory. Charity is only charity if it is willing.

Unfortunately, however, compulsion is almost always assumed in the public discussions around the topic of social justice. We jump from the moral imperative to give to the political expediency of a forced transfer, to the legal tactic of a compulsory program. That is not only a stretch, but betrays a misunderstanding of virtue.

In Against Heresies Irenaeus spoke of “the ancient law of human liberty” and explained that “God made man a free [agent] from the beginning, possessing his own power, even as he does his own soul, to obey the behests of God voluntarily, and not by compulsion of God. For there is no coercion with God. . .” (4.37.1).

How else to you explain the prophets, the apostles, and Christ himself urging us toward virtue and away from vice? “[B]ecause,” said Irenaeus, “man is possessed of free will from the beginning, and God is possessed of free will, in whose likeness man was created, advice is always given to him to keep fast the good, which thing is done by means of obedience to God” (4.37.4).

Virtue hangs upon choice. If God made us good, rather than allow our moral effort, “it would come to pass, that [our] being good would be of no consequence, because [we] were so by nature rather than by will, and are possessors of good spontaneously, not by choice. . .” (4.37.6).

If synergia implies God and the individual working together, not God working on his own, how much less does it mean God and some third party taking the goods of the individual to give for him? Giving alms is indeed part of our sanctification, but as Chrysostom preached,

By alms-doing I do not mean that which is maintained by injustice, for this is not alms-doing, but savageness and inhumanity. What profits it to strip one man and clothe another? For we ought to begin the action with mercy, but this is inhumanity. If we give away everything that we have got from other people, it is no gain to us. (Homilies on the Gospel of John 73)

Here we have yet another layer of complexity. Even Basil — as harsh as he could be on the rich — recognized that taking a man’s possessions is wrong. It may in some sense be theft to hold onto that which should be given to the poor, but as Basil also acknowledged, “Is not the person who strips another of his clothing called a thief?” (I Will Tear Down My Barns 7).

There is a moral tension here that must be resolved by the voluntary activity of the individual. It cannot be compelled by the external coercion of others. If God does not coerce virtue, then neither do his people. To remedy one evil with another is self-defeating. It not only runs counter to the character of God, but also robs people of God’s intended gift for their salvation: the free participation in his work through charity.

Employing Basil and Chrysostom as proof texts for a political platform is a misuse. Rather they are like the prophets, apostles, and Christ himself in exhorting us to virtuous action. Unless we wish to exacerbate the problems we seek to solve, we must somehow find our way to a charity that disdains compulsion as much as avarice.