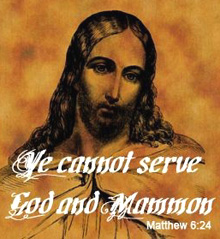 by Fr. G. Peter Irving III –
Jesus tells us: “No servant can serve two masters. He will either hate one and love the other, or be devoted to one and despise the other. You cannot serve God and mammon.” …

Whom will you serve? Which will you choose? God or mammon? The things of God or the things of this world? The Lord or the devil? This is the choice that is ever before us in a myriad of ways both large and small. And there is no sitting on the fence. If we hate one, we will love the other.

On Tuesday, November 6, 2012 we faced as a nation a “God or mammon” choice of mammoth proportions. In the most consequential election of our history, the majority of Americans voted for mammon and rejected God. Some did so knowing full well what they were doing (e.g., the Planned Parenthood and the LGBT crowd). Others did so unaware of the dire and far reaching ramifications of their vote.

This was certainly the case with the Hispanic vote. According to the Pew Research Center, “Latinos voted for President Barack Obama over Republican Mitt Romney by 71% to 27%.” This is an astounding statistic not only because the differential is so great but more so because the majority of Hispanics identify themselves as Catholics.

This can only mean that millions of believing Hispanic Catholics, the very ones who pack our churches Sunday after Sunday and who have such a deep devotion to the Mother of God, voted for the following: (1) for more aborted babies, (2) for the destruction of the family through the promotion of homosexual marriage and (3) for the persecution of the Church they love so dearly and which has served them so well. In other words, they voted against their own values and deeply held beliefs; they voted against themselves. What is more, they did so (many of them, at least) not knowing what in fact they were voting for.

The day after the election I received an email from a parishioner of a parish where I was once served. She is a knowledgeable Catholic and was devastated by the results of Tuesday’s election. She wrote: “My mother who is a fervent Catholic and a Guadalupana (i.e., devoted to Our Lady of Guadalupe) voted for Obama. I tried to dissuade her but I couldn’t get through to her. My sister was completely closed to hearing anything negative about the President. She is an extraordinary minister of Holy Communion and she told me that if voting for Obama meant she was going to hell, so be it.” Shocking.

This is very troubling and does not portend well either for the future of our nation or for the future of the Church in America. There is undeniably a huge disconnect between piety and practice, between faith and life. The Fathers of Vatican Council II addressed this problem fifty years ago in their Pastoral Constitution on the Church in the Modern World. They wrote: “This split between the faith which many profess and their daily lives deserves to be counted among the more serious errors of our age” (Gaudium et Spes, 43).

Errors have consequences. Deadly errors have deadly consequences. Our nation is now on an even more deadly path. Only God knows the tribulations that lie ahead. I am a priest, not a political scientist. But from my perspective I do not see any easy political remedy to this most serious problem. I may be wrong, but as I see it, last Tuesday was the last chance for at least an attempt at a political solution.

So what happens now? Where do we go from here? We who are believers have to abandon ourselves into God’s hands. He is our Lord and our King! We must also pray for our President and for those share his radical ideology; we pray that they may be converted. We must pray for our nation and for all its citizens. Many of us have grown selfish and self-indulgent and our sins have blinded us.

But there is more. We are in this Year of Faith! It could not have come at a better time. How wonderful is the providence of God who inspired in our Holy Father this desire for the whole Church to rediscover and renew its faith! Let us take to heart the invitation of Pope Benedict and begin now to work at growing in our friendship with Christ, deepening our knowledge of the content of the faith so that we in turn may be used by God to open the eyes of the blind, both within the Church and without.

We also need to be prepared to embrace the cross. In his Apostolic Letter, Pope Benedict explains: “The life of Christians knows the experience of joy as well as the experience of suffering. How many of the saints have lived in solitude! How many believers, even in our own day, are tested by God’s silence when they would rather hear his consoling voice! The trials of life, while helping us to understand the mystery of the Cross and to participate in the sufferings of Christ (cf. Col 1:24), are a prelude to the joy and hope to which faith leads” (Porta Fidei, 15).

Finally, today is the liturgical Memorial of Saint Leo the Great, successor of St. Peter, who in the 5th century guided the Church through very turbulent times. The Collect from his Mass should lift our drooping spirits and spur us on to greater faithfulness.

“O God, who never allow the gates of hell to prevail against your Church, firmly founded on the apostolic rock, grant her, we pray, that through the intercession of Pope Saint Leo, she may stand firm in the truth and know the protection of lasting peace.”

In closing, we turn to Holy Mary, the Virgin of Guadalupe, and humbly ask her to intercede for us and for this nation we love.

1 thought on “America Voted for Mammon and Rejected God”