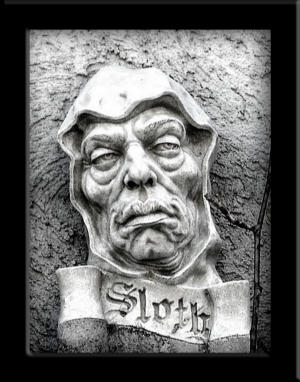 Sloth, often called acedia, is described simply as the sin of laziness. However, while this is part of the manifestation of sloth, the central problem with sloth as a capital sin is spiritual laziness – which leads to lukewarmness.

Sloth is connected with sensuality. It proceeds from a love of pleasure, inasmuch as it inclines us to avoid effort and hardship. There is in all of us a tendency to follow the line of least resistance, which paralyses or lessens our activity.

Sloth is an inclination to idleness or at least to aimlessness, to apathy in action. At times this is a morbid disposition due to poor condition of health. More frequently it is a disease of the will, which fears effort and recoils from it. The slothful person wants to escape all exertion, whatever might interfere with their comfort or involve fatigue. Like the real parasite, they live on others to whatever extent they can, becoming gruff and ill-tempered when one tries to rouse them from their inaction.

There is in all of us a tendency to follow the line of least resistance, which paralyses or lessens our activity.

There are various degrees of sloth. The indolent person takes up his task reluctantly, and indifferently; what he does, he does badly. The sluggard does not absolutely refuse to work, but he delays and postpones indefinitely the accepted task. The truly lazy person wants to do nothing that proves irksome and shows a distinct aversion to all real work, whether physical or mental. The idea of right living inspires in him not joy but disgust, because of its laboriousness.

When sloth is related to spiritual exercises it is called spiritual sloth. This consists in a certain dislike for things spiritual, which tends to make us negligent in the performance of our exercises of piety (prayer, the sacraments etc.), causes us to shorten them or to omit them altogether for vain excuses.

In order to understand the malice of sloth we have to remember that man was made to work. When God created Adam and Eve he placed them in the garden Eden “to cultivate and care for it” (Gen. 2:15). This is because man is not a perfect being, having many faculties which must act in order to be perfected.

Hence, it is a necessity of man’s nature that he should labour to cultivate his powers, to provide for his spiritual and physical wants and thus tend towards his heavenly goal. The law of work, therefore, precedes original sin. But because man sinned, work has become for him not merely a law of nature, but also a punishment, in the sense that work has become burdensome and a means of repairing sin: it is in the sweat of our face that we must get our bread to eat, the food of the mind as well as the body (Gen. 3: 19).

The slothful man sins more or less grievously according to the obligations and duties he neglects. When he shuns matters of importance in regards to his duties of state, or goes so far as to neglect religious duties necessary to his salvation or sanctification, he commits a grievous fault. A venial sin is committed when he fails in civil or religious duties of lesser moment.

Because of its harmful consequences, spiritual sloth constitutes one of the most serious obstacles to perfection. This is because it makes life more or less barren:

“I passed by the field of the slothful man,
by the vineyard of the man without sense;
And behold! It was all overgrown with thistles;
its surface was covered with nettles,
and its stone wall broken down.
And as I gazed at it, I reflected;
I saw and learned the lesson:
A little sleep, a little slumber,
a little folding of the arms to rest –
Then will poverty come upon you like a highwayman,
and want like an armed man” (Prov 24: 30-34).

Indeed. This is what one finds in the soul of the slothful man. Where there should be virtues and charity one finds vices alongside crumbling walls which mortification had raised to protect virtue. As a result, temptation soon becomes more persistent and assailing: “For idleness has taught much evil” (Sirach: 33: 29). It was idleness and pride that destroyed Sodom (Ezech. 16: 49).

For idleness has taught much evil

Man’s heart and mind cannot for long remain inactive. Unless they are engaged by study or other work they are soon filled with a host of fancies, thoughts, desires and emotions. Because of our fallen nature sensual, ambitious, proud and selfish thoughts then gain the upper hand exposing us to sin. St. Thomas tells us that, in addition to drinking, carousing, gambling and taking up with bad company sloth can eventually lead to despair since “sloth is a real sadness that casts the spirit down.”

What is ultimately at stake is our eternal salvation. Apart from the sins into which idleness causes us to fall, the mere fact of failing to fulfil important duties incumbent on us is sufficient cause for reprobation. The barren tree, by the mere fact that it bears no fruit, deserves to be cut down and thrown into the fire: “Every tree therefore that doth not yield good fruit, shall be cut down and cast into the fire. (Matt. 3: 10).

To remedy sloth we need first of all to form in ourselves strong convictions concerning the necessity of work; to make ourselves understand that both the rich and the poor come under this law, and that its infringement may involve eternal damnation. This is the lesson given by Our Lord in His parable of the barren fig tree.

If a person is rich and not obliged to work for himself, he must do so for others. And indeed the opportunities are not lacking: how many poor need help, how many ignorant need instruction, how many broken hearts need mending, how many families need rearing to ensure, among other things, that the future of the children will be safeguarded!

make sustained and intelligent efforts to train and strengthen the will

Alongside convictions we also need to make sustained and intelligent efforts to train and strengthen the will. Since the slothful man instinctively shrinks from effort it is important to keep in mind that there is no one more wretched than the idle man. Not knowing how to manage his time, the idle man soon becomes a burden to himself and ultimately he becomes wearied of life itself. Is it not preferable to engage in useful work and secure some real contentment by striving to make those around us happy?

Among the slothful there are those who do expend a certain amount of excess activity at play, sports and worldly gatherings. These must be reminded of the serious side of life and that they should turn such activities into more useful and worthier fields of action.

Christian marriage with its immediate obligations and duties often proves an excellent remedy for sloth. Parents realize the necessity of working for their offspring and the inadvisability of entrusting to strangers the care of their interests. What we must constantly bear in mind is the end of life: we are here on earth in order to attain, through work and virtue, a place in heaven. God is ever addressing to us: “Why stand you here all the day idle…Go you also into the vineyard” (Matt. 20: 6-7).

————-
Mr. Paul Kokoski is a freelance writer who holds a BA in philosophy from McMaster University in Hamilton, Ontario. His articles have been published in several journals including, Homiletic and Pastoral Review, New Oxford Review, Catholic Insight and Challenge Magazine.