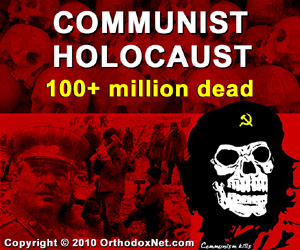 by Edward Pentin –
Like a fair number of citizens from former Soviet-ruled countries, Russian pro-life campaigner Alexey Komov is surprised and disheartened to see the West flirting once again with socialism as a consequence of the global financial situation.

Whether it be in the form of support for the Obama administration, or the backing of other socialist-leaning policies and political parties, he sees the trend as disturbing and irrational.

In Rome to address a conference to launch the Rome office of the Dignitatis Humanae Institute (Institute for Human Dignity) June 29, Komov stressed that socialism has “never worked in world history” and that he found it “really amazing” to see such support when, in the 20th century, the ideology had caused such great pain and suffering “all in the name of social reform, progress and improvement.”

Speaking with ZENIT after giving his address, Komov recalled the estimated 100 million people who died in the Soviet Union “in the name of social reform or revolution.” He alludes to the hounding of the nobility who were killed or forced to emigrate, the 200,000 clergy and religious who lost their lives or were sent to gulags, the tens of thousands of Kazakhs who were murdered, and the “one hundred percent” destruction of social classes.

What disturbs him now is that many countries have a “softer version” of socialism. “We’re witnessing this in the policies of Obama in the United States, recently those of Zapatero in Spain and others,” he says. “Each has been inspired basically by the same socialist ideas, a softer form but still from the same source.”

A marketing manager by profession and a former adviser to Metropolitan Hilarion of Volokolamsk, chairman of the Department of External Church Relations for the Russian Orthodox Church, Komov now serves as Russia’s representative to the World Congress of Families, said to be the world’s largest association of organizations defending the traditional family.

He explains that he finds the Obama administration’s socialist leanings particularly disturbing, and draws attention to a hero of President Obama and Secretary of State Hillary Clinton: Saul Alinsky, a neo-Marxist writer who dedicated his first book to none other than the Devil, whom he saw as the first successful revolutionary to overthrow the “oppressive regime of God.”

(Alinsky’s exact words were: “Lest we forget at least an over-the-shoulder acknowledgment to the very first radical: from all our legends, mythology, and history… the first radical known to man who rebelled against the establishment and did it so effectively that he at least won his own kingdom — Lucifer.”).

Komov believes that if you “dig deep enough into the ideological roots of these socialist movements, you end up finding satanic roots in them.” And although only a softer version is prevalent now, “it is still very dangerous,” he says. “I would warn all those people fascinated by socialist ideas that they have never worked in human history — never worked.”

The traditional nuclear family is a particular enemy of socialism, he says, because it is the basic institution that preserves values and passes them on to the next generation.

“The state, if it wants to dominate life and the individual from birth to death, needs to destroy the family, because the family is independent of the state,” he argues. “As Marx and Engels said, the family is a repressive, bourgeois institution that needs to be destroyed; they need to get rid of its patriarchal power and that of Christianity because they are the main obstacles of the social revolution.”

He further believes that the merging of Freudianism with Marxism led to the sex and drugs revolutions of the 1960s, resulting in such ideologies as radical feminism and environmentalism.

During his speech, Komov noted the population of Russia has decreased by almost 10 million in 20 years, partly due to high abortion rates and an increasingly hedonistic culture. But can this be blamed on socialism when communism fell over 20 years ago? “It’s a world phenomenon,” he says, but adds it is “inevitably linked to a moving away from Christianity” and the embracing of a popular culture which stresses self-fulfilment and no personal self-sacrifice.

Komov, who is also trying to raise awareness of these issues through the “Family and Demography Foundation,” a body led by two Russian Orthodox priests well-known in Russia, Dmitry Smirnov and Maxim Obukhov, says he is also working closely with the Catholic Church.

“We should be closer together,” he says, “given that we’re facing the same secular attacks on things we hold dear to our hearts.”