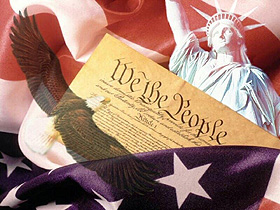 “We hold these truths to be self-evident, that all men are created equal, that they are endowed by their Creator with certain unalienable Rights, that among these are Life, Liberty and the pursuit of Happiness.”

Life, liberty and the pursuit of happiness. Those words, written over two centuries ago, still resonate in the depths of our hearts, not simply because they are lofty ideals for which we find ourselves compelled to strive, but because they reflect an aspect of man’s irrepressible desire to attain and enjoy human fulfillment. They speak not only of the American experiment particularly, but echo the goals of human experience generally. With those words we are reminded of the specific purpose for which we are created and the particular end toward which we are directed; on hearing them, we are moved to realize that to be human, bestowed as we are with the gift of life and dignity, created in God’s image and likeness, is truly spectacular.

The American crisis is a moral crisis.

Given the many alarming elements present in today’s America which seek to deal a fatal blow to life, liberty and the pursuit of happiness, whether through direct attacks, covert manipulation of public opinion, or through the dissemination and application of counterfeit notions of human freedom, it is easy to fall into despair. That our nation is in peril is not an exaggeration in the least. In the first place, this dire predicament is the effect of secularism’s insistence on the detachment of human rights from the moral law. The American crisis is a moral crisis.

As Christians we are called to analyze culture, and, aided by the Spirit, heal, elevate and purify those elements within it which run contrary to the Gospel. Given how far adrift America is, the restoration of her proper course is a daunting task. But regardless of the strength, duration and outcome of the storm in which we are immersed, as Christians, as men and women informed by the light of faith, we will not lose hope. As St. Teresa of Avila said, God alone suffices. Our hope does not rest on the passing form of this world (1 Cor. 7:31), but on the promises of Christ and the glorious future that awaits us, for “God is faithful, by whom you were called into the fellowship of his Son, Jesus Christ our Lord” (1 Cor. 1:9).

We are called to become, by faith in Christ, members of the divine family and thus enter into the invisible and other-worldly (Jn 18:36) fellowship of the kingdom of God. Jesus, as the door to eternal life (Jn 10:7-9), has opened the way to that divine kingdom. Life in Christ is a participation in God’s own life and is therefore a substantially and qualitatively new way of living. Speaking of his salvific mission for humankind, Jesus said: “The thief comes only to steal and kill and destroy; I came that they may have life and have it abundantly” (Jn 10:10).

Abundant life! While Thomas Jefferson wrote of life, liberty and the pursuit of happiness in the context of throwing off a despotic British government in favor of an independent nation, Christ speaks of eternal realities which travel inconceivably beyond the temporal, and which will continue with an unending permanency guaranteed by God himself. We are brought forth from nothingness to life by Christ, sustained by Christ, and gifted with the potential to enjoy everlasting, divinely infused supernatural bliss by Christ’s redemptive sacrifice on the cross. So long as we remain in Christ, we no longer simply pursue happiness, but rather it becomes an inalienable and eternal reality — and this wondrous state of existence is available as God’s gift to us here, right now, although its fullest dimension is attained only in the next life.

St. Paul wrote that “Eye has not seen, ear has not heard, nor has it so much as dawned on man what God has prepared for those who love him” (1 Cor. 2:9). Since the glorious state of our future as Christians far exceeds our understanding, there is little that can be definitively said about what awaits those who love God. The temptation, however, is to project our experience of the often meager happiness tasted here through contact with created objects onto the eternal “now” of heaven. That is, since the normal experience of earthly happiness is often so fleeting and unsatisfying, we tend to view the happiness of heaven through an unsatisfactory, temporal lens. Given that, we might not even be too sure we want to live forever!

Most of us have not the slightest idea of what supernaturally infused bliss is it like? What does happiness that flows directly from God, an infinitely powerful Being who is life itself, into the very depths of our soul, feel like? What might such a powerful encounter with God’s love do to us? To be sure, it is life changing. Additionally, we learn from the saints that it cannot be characterized simply as a feeling of pleasure or security or satisfaction or tranquility, or even all of these put together. It is far more. Take all the pleasurable experiences in life and fashion them into one event: it would seem as nothing compared to God’s favorable gaze upon the soul for even a single instant. A tremendous, unforgettable and fiery love is ignited in the human spirit with but one sudden, unexpected Divine glance — an incomparable love of such depth that all the treasures of the world become less than rusted iron.

St. Thérèse of Lisieux speaks of an encounter she had with Christ after a period of voluntary mortification she underwent in order to cleanse herself of less than heavenly desires.

“God did for me what Ezechiel reports in his prophecies: Passing by me, Jesus saw that the time had come for me to be loved, He entered into a covenant with me and I became His own. He spread his mantle over me, he washed me with precious perfumes, He reclothed me in embroidered robes, He gave me priceless necklaces and ornaments. He nourished me with purest flour, with honey and oil in abundance. Then I became beautiful in His eyes and He made me a mighty queen” (Story of a Soul 101).

Indeed, divinely infused happiness can be experienced right now. Scripture is filled with numerous references indicating we have access in the present to the love of God, to the consolations of the Spirit and to an infused joy that permeates the soul as a heavenly dew. The love of God is not something to be had only later, after a long life of deprivation and suffering, for our personal God seeks to lift us on divine arms, sweep us into his very life, and caress us in the sweet waters of tenderness. “See, I come quickly; I have my reward in hand” (Revelation 22:12).

“All you who are thirsty, come to the water! You who have no money, come, receive grain and eat; come, without paying and without cost, drink wine and milk!” ( Isaiah 55:1 ). The journey toward human fulfillment is found in Christ, whose love supplies both our strength and our thirst, for the Lamb is our shepherd who leads us to springs of living waters (Revelation 7:17 ).

Christ gave of himself as an infinite gift of love for all people, past, present and future. What remains to be seen, is whether we will reciprocate that love, for Christ gives his greatest favors only to those who give themselves completely to him. In the first place, this means living a moral life of virtue and holiness, characterized by diligent and sincere fidelity to God and his teaching presented through the Church. Unfortunately, many brethren, thinking access to the divine treasures of love can be had by halfhearted measures, and who even exhibit a spirit of willful dissent from holy mother Church, fail to understand the meaning of obedience of faith in loving freedom. To have faith in Christ is to assent fully with both intellect and will to all his words and deeds, including whatsoever he has ordained through his Church for our own good. Obviously, it is necessary to believe the Church and adhere to her divinely instituted teachings on faith and morals.

Giving oneself to Christ is, of course, not easy; for it is a disciplined, prayerful and sacramental way of life opposed to the ways of the world, involving the whole man, both interiorly and exteriorly. “To be in Christ means being a completely new creature. Everything of the old is gone, now everything is made anew” (2 Cor. 5:17). Regardless of the difficulties involved, take courage and remember they are temporary; for as we share in Christ’s suffering so too will we share abundantly in his divine glory (Rom. 8:17; 2 Cor. 1:5).

On this Independence Day, it is important to reflect on what it means to seek life, liberty and happiness. While it is safe to say everyone desires these goods, not everyone understands where they are found. In fact, it is not even a question of where they are found, but in Whom they are found: “I am the way and the truth and the life” (Jn 14:6). Do we see beyond the present into the window of eternity? Do we truly desire above all else to love God for his sake, to become his child, and to live as a member of the divine family? These are the gifts God offers to man. These are the gifts the Church presents, as the sacrament of salvation, to the world, in order that the world may be brought to Christ.