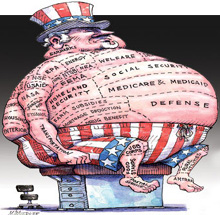 by Peg Luksik –
Anyone who has ever known a recovering alcoholic has probably heard the story of what finally caused that person to face his addiction and get sober. They also have probably heard that after the physical withdrawal symptoms have subsided, the emotional withdrawal process begins. Many recovering alcoholics find the emotional process much more arduous in the beginning, and much more freeing as they move further into sobriety.

They have to actually experience all the emotions and challenges they either deadened or escaped through the alcohol. They report that it’s almost a knee-jerk reaction to say, “I can’t do this!” and reach for the nearest bottle. It’s only when they begin to say, “With God’s help, I CAN and WILL do this!” that freedom from addiction begins.

Americans are now a nation of addicts. Only we are addicted to government. Every time a challenge or difficulty arises, we have been conditioned to turn to the government to either remove (deaden) the pain that we might feel or to help us escape the challenge that we need to conquer. And just like every other addict, we collectively deny that our dependence is a problem.

But think about so many of the conversations that we have heard or participated in about cutting government spending. The phrase, “Cut the spending but not in my program,” is uttered so often that it has become a cliché.

If anyone suggests that we might want to consider possibly looking at a solution to a challenge that does not involve the government, that individual is labeled as heartless and uncaring. They are given a lecture about how the people in question need assistance – as if assistance and government are synonymous terms.

The addiction has moved beyond assistance into control. Instead of dealing with each other, we get the government involved with an ever-growing list of laws and regulations. Some of them grow out of the government bureaucracies, but many of them are initiated at the request of citizens who want the government to deal with whatever situation they are facing.

If we are serious about shrinking Washington, we need to begin by facing our own addictions.

Is there a government program that we participate in, not because we have an urgent need, but just because we “want our piece of the pie”?

Is there a way to deal with an issue using church and community resources instead of a federal program? Have we ever looked for one?

In the beginning, the withdrawal symptoms will be difficult to manage. As with any addict, we will need to begin by facing our own areas of addiction without excuses. We will need to withstand the experience before us without reaching for the government bottle. We will need to learn different ways of dealing with challenges or difficulties. We may even need to stop listening to our fellow addicts who tell that we shouldn’t have to abstain until everyone else does.