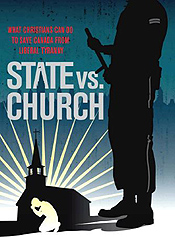 by Andrew M. Greenwell, Esq. –
Both Church and State have public voices; both sing a song. The Catholic, both a citizen and a member of Christ’s faithful, hears both songs and both voices, for he or she knows there are two. But like St. Thomas More’s last words as he approached the scaffold and imminent death, the Catholic is “the King’s good servant, but God’s first.” One song, one voice in particular, the voice of God, the vox Domini Iesu Christi, holds him in absolute thrall. …

“Duo sunt,” said the 5th century Pope Gelasius I in a famous letter to Emperor Anastasius, “quibus principaliter mundus hic regitur.” “Two there are by which this world is ruled.” Pope Gelasius I merely reformulates what is the teaching of our Lord, and which is part of reality, of what is, in the political world for those who bask in the benefit of Revelation. “Render unto Caesar that which is Caesar’s, and to God the things that are God’s.” (Matt. 22:21) Since Christ came into this world, the Christian knows that there are two public songs, and not just one, in the world.

Both Church and State have public voices; both sing a song.  The Catholic, both a citizen and a member of Christ’s faithful, hears both songs and both voices, for he or she knows there are two.  But like St. Thomas More’s last words as he approached the scaffold and imminent death, the Catholic is “the King’s good servant, but God’s first.”

When push comes to shove-and there is progressively more shoving and less pushing as the Western democracies in their re-creation of society in man’s own image jettison their Christian capital as if but flotsam or jetsam-the Catholic will say with St. Peter, “We must obey God rather than men.” (Acts 5:29).  The Catholic insists there are two voices, but also that there is one more beautiful and lasting than the other-for he hears them both and is able to distinguish them and he knows which is more beautiful-duo sunt.

Like the singing Jewish captive by the rivers of Babylon, the Catholic would rather his right hand wither, and his tongue cleave to the roof of his mouth, than forget the words to his song, the song of the sounds of heavenly Zion, duo sunt. (Cf. Ps. 137 (136):5-6)  Duo sunt, duo sunt, duo sunt is the leitmotif of his song, a political and religious song which is not monophonic, but diaphonic. His political song has two voices which, if there is to be proper order, must try to sing in harmony.

Modernly, the Catholic is pressed hard between two groups that command center stage, and which have in their hands either power or violence (and there is but a thin line between the two).  These two groups cry not duo sunt, but unus est, “one there is.”  These are the secularists and the Islamists, and they seem to divide the world between them.

For secularists, the State is all there is; there is no spiritual power.  In their zeal for power, the dogmatic secularists cry out like the high priests did to Pontius Pilate: “We have no king but Caesar.” (John 19:15)  The modern secular State is the Hobbesian “mortal God,” and there is no immortal God which competes for obeisance, for secularism subscribes to the Nietzschean view that the immortal God-the God of Jacob, Isaac, and Joseph-is dead. For them, God is dead.

Since for the modern secular State God is dead and sings no more, it, and it alone, is the final reality: unus est.  It calls itself liberal, but it is not, since it can only hear one voice: its own, and so it closes itself off in a prison.

The secularist knows no reality outside of what he makes for himself.  Man is one dimensional, and he answers neither to God nor to any fixed nature.  For the secularist, there is no such thing as an objective reality, one pre-existing him, one founded on nature or nature’s God, one which must be given public voice.  But against the voice of the secularist who exclaims unus est, the Church insists in both the reality of the natural law and in the truth of the Gospels.  Nature and Nature’s God. Duo sunt.

The secularist does not like this, and he is a proud spirit who does not endure to be mocked. As James V. Schall states in his book The Sum Total of Human Happiness, there is, in the modern world, a real hatred to those who sing the song of duo sunt.  There is, he says, “a real hatred of man as he is pictured in natural law and in the Gospels.”  Anyone who insists on this picture of man is likewise hated, is a persona non grata.  And so it is in his encyclical Centesimus Annus, Pope John Paul II adverts to these singers of duo sunt, those “convinced that they know the truth and firmly adhere to it,” and he recognizes that they “are considered unreliable from a democratic point of view.” (No. 46)

In the main, secularists like to think themselves liberal, but they are intolerantly liberal.  Leo Strauss called secularist liberalism a “seminary of intolerance.”  They are tolerant of all intolerance but their own, to which intolerance they are blind.  And that intolerance is aimed at particular ferocity at those who insist on an objective reality outside of that which we make for ourselves.  This includes those who insist-the way Catholics must do if they are to think like a Catholic-of the truth of duo sunt.

To be sure, the liberals–being effete in the main–do not like blood.  But though they wince at drawing blood, they are not shy at wielding power, much less moral suasion.  The problem they confront, as James Schall puts it is “how to silence Socrates without the nasty business of killing him, and how to tame the teachings of Christ without putting Him on the Cross.”  Their schemes to do this are legion, including ridicule, public banishment, the closing of the public square to them, and-increasingly-legal burdens and legal constraints.  There are ominous signs of worse things to come.

Why this foreboding?  “The claim that certain actions are wrong,” Schall observes, “is implicitly a threat to the [modern] state, which is designed to prevent strife and which is neutral to all values except to intolerance . . . . In this sense, the theory is already in place that makes Christians enemies of the state. We simply await its enforcement, either by converting or coercing Christians to live according to secular norms or by marginalizing or eliminating those who insist in calling wrong what the state guarantees as ‘right.'”

What Schall sees coming is secular dhimmitude.  Unless things change, there will be a time where, like Christ, we will be “handed over” to the secular authorities.  So, at least, the trajectory appears to be going.