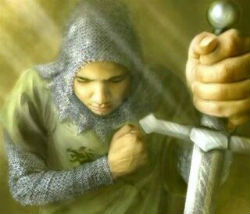 by Michael Terheyden –
In the Face of Secularism, What is needed is a Defense of the ancient yet ever new faith which sets people and Nations free
The Obama administration’s unconstitutional mandate regarding birth control coverage reminds us that we live in the age of secular humanism, when many people no longer believe religious faith is reasonable or important.

The message this administration sends to Christians is that our faith is bad for modern society, and we will no longer be allowed to live according to our beliefs in this nation. Therefore, as we prepare to enter into the deepest mysteries of our faith this Lenten season, perhaps it would be helpful if we compare the reasonableness of our faith with secular humanism.

The renowned Catholic theologian Germain Grisez provides us with excellent information on this subject in Volume 2 of his book, Living A Christian Life. This article was inspired by the excerpts in the section on faith which focus on secular humanism’s claim that Christianity is not rational, scientific or tolerant. But before I proceed, I want to be clear about how I use the term “secular humanism.”

When we hear the word “secular,” we usually think of something that does not pertain to religion or is neutral toward religion. When we hear the word “humanism,” we might think of concern for the needs and welfare of people or compassion for their suffering. However, “secular humanism” is not the sum of these two words. It has a different meaning: It is a nonreligious world view, a belief system, an ideology.

The values of this ideology seem largely influenced by atheism, materialism, pragmatism, relativism, and subjectivism. Marxism, communism and socialism are expressions of a secular humanistic ideology. So are modern Western liberalism and the secular state. This helps explain why Western secular governments are seen as particularly anti-Christian.

Secularism has married itself to a materialistic world view, yet our very nature reaches beyond the material universe in search of God; but not just any God, the Christian God. It seems the only real solution to the human condition is a God of infinite love and mercy who would become one of us, die for us, and raise us up to a life of supernatural love in this world and in eternity. This is the Christian God.

But secularists claim that it is irrational to believe in that which is “neither obvious nor shown to be true” (23). However, Grisez points out that our faith is not irrational. God can reasonably be shown to exist, and even if we cannot understand the great mysteries of our faith, we can see that they logically flow from God’s attributes. For instance, although we cannot understand or prove the existence of the Trinity, we can logically see that an all-powerful, infinitely perfect intellect and will could be triune.

Secularists try to debunk such reasoning by claiming that science offers the only legitimate knowledge of reality. But Grisez tells us that all such claims are self-defeating since they cannot be established by any science. Faith and science do not deal with the same subject matter. They ask different questions. Consequently, their answers do not conflict with each other; they compliment each other. Grisez says, “It is a sign of harmony between faith and science that some able scientists are devout believers” (24).

Another argument used against Christianity concerns religious wars. Christianity is not a pacifist religion. Sometimes, the right and loving thing to do is to defend oneself, one’s family, or one’s country. The Church spells out conditions for legitimate defense in paragraph 2309 of the Catechism of the Catholic Church. Furthermore, when viewed within a historical context, it seems Christians have generally held to a much higher standard than the norm. It also seems that most of the condemnation against Christians is based on distorted information. However, Christians have given great scandal at times, even waged unjust wars. This was terribly wrong.

Having said that, let us be clear. It is not Christians who have waged the bloodiest, most devastating wars in human history. That disgrace belongs to the devotees of atheistic, materialistic, relativistic, and pragmatic philosophies, and their children: Nazism, fascism, Marxism, and communism. Today’s most immediate threats to peace are radical secular humanism and radical Islamism. Christianity is not the problem in the world; it is the world’s hope.

Secularists also claim that Christians are intolerant because they “affirm dogmas and hold objective moral norms rather than acquiescing in religious indifferentism and moral subjectivism” (28). But Grisez reminds us that “every world view and way of life logically excludes alternatives” (28). Relativists and subjectivists also “reject every position incompatible with their own” (28). He says, “true tolerance is not indifferentism and subjectivism, but respect for those who hold another world view and way of life” (28).

Grisez also says that secularists “constantly talk about civility and moderation, but they are not immune from intolerance and fanaticism. Indeed, they are especially tempted to be arbitrary and self-righteous, precisely because they do not acknowledge a higher reality” (29) or an objective moral standard to which all reasonable people must submit. And since they are “unable to call on their opponents to submit to [objective] principles. . . , relativists and subjectivists inevitably will be tempted to use nonrational methods–manipulation and even suppression–in order to prevail” (29).

For Grisez, then, secularism leads to moral irresponsibility. He says it often results in lying, manipulative behavior, brutal competition, and exploitation of the weak by the strong. Neither does it respect the dignity of human persons or believe that people are endowed with inalienable rights. Given Grisez’s analysis, we might wonder if the real reason secularists reject Christianity is because they simply refuse to “Repent, and believe in the Gospel” (Mk 1:15).

Thus, it appears that secularism is littered with logical inconsistencies and not truly humanitarian. Nor does it offer valid reasons for the rejection of Christianity. So let us not be confused by secularists’ irrational talk or cowered by their aggression. Devout Christians are the hope of America and the world! But before we can transform either, we must allow the Holy Spirit to purify us and transform us into the likeness of Jesus. May we have a fruitful and grace-filled Lent.

1 thought on “In the Face of Secularism, It is Time for a New Defense of Christianity”