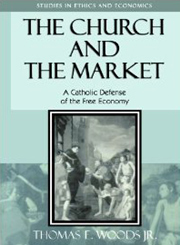 by Andrew M. Greenwell, Esq.
The free market must operate within certain moral, institutional, and legal norms, or else it becomes something other than a free market. The free market is not an autonomous, free-for-all area exempt from moral law or from the hand of positive law. The market must always be protected and kept free, and it must be safeguarded from those who would seek to use it wrongly, whether by fraud, manipulation, abuse of economic power, or monopolization. It operates within the Rule of Law. …

The social doctrine of the Catholic Church undeniably puts great emphasis on the free market as a valuable, indeed “irreplaceable” economic and social institution. (Compendium, No. 349) Drawing largely from John Paul II’s encyclical Centesimus annus, the Compendium of the Social Doctrine of the Church is bullish on the free market and supports it as the best general means to assure proper allocation of scarce economic resources, of achieving economic efficiency, and of benefiting the common good.

The free market is an institution of social importance because of its capacity to guarantee effective results in the production of goods and services.  Historically, it has shown itself able to initiate and sustain economic development over long periods.  There are good reasons to hold that, in many circumstances, “the free market is the most efficient instrument for utilizing resources and effectively responding to needs.”

The Church’s social doctrine appreciates the secure advantages that the mechanisms of the free market offer, making it possible as they do to utilize resources better and facilitating the exchange of products.  These mechanisms “above all . . . give central place to the person’s desires and preferences, which, in a contract, meet the desires and preferences of another person.”  (Compendium, No. 347) (quoting  Centesimus annus, 34, 40).

The Compendium continues: “A truly competitive market is an effective instrument for attaining important objectives of justice: moderating the excessive profits of individual businesses, responding to consumers’ demands, bringing about a more efficient use and conservation of resources, rewarding entrepreneurship and innovation, making information available so that it is really possible to compare and purchase products in an atmosphere of healthy competition.” (Compendium, No. 347)

The free market, then, is generally the best means to achieve a number of desirable economic and social ends, and is justified as an institution to be promoted precisely because of these ends it achieves so efficiently.  When the free market carries out these functions “it becomes a service to the common good and to integral human development.”  The free market, in fact, is precisely valued and judged because of the ends it achieves,” and it is the market’s social utility–and not the market itself independent of its ends since it is but an instrumental good–that justify it.  The free market is a means to an end, in particular, the means to the promotion of the common good, where it finds its value and justification. (Compendium, No. 348)

For the same reason, therefore, the free market is only justified to the extent that it achieves these ends, as the “free market cannot be judged apart from the ends that it seeks to accomplish and from the values that it transmits on a societal level.” (Compendium, No. 348)

The free market must operate within certain moral, institutional, and legal norms, or else it becomes something other than a free market.  The free market is not an autonomous, free-for-all area exempt from moral law or from the hand of positive law. The market must always be protected and kept free, and it must be safeguarded from those who would seek to use it wrongly, whether by fraud, manipulation, abuse of economic power, or monopolization.  It operates within the Rule of Law.

To “safeguard the prerequisites of a free economy” and the benefits of a free market, the State has the “fundamental task” of “determining an appropriate” legal and juridical framework “for regulating economic affairs.”  This includes assuring “individual freedom and private property, as well as a stable currency and efficient public services.” (Compendium, No. 352)

Importantly, the State’s role in assuring freedom of markets must not be one where it tries to “direct economic and social policies” and “become abusively involved in the various market activities,” and become “authoritarian–or worse, totalitarian” in its supervisory and regulatory role.  Wherever State power becomes involved, however, such actions “must be consistent with the principle of subsidiarity.” (Compendium, No. 351)

In some extraordinary cases, where the market has clearly failed or does not obtain for whatever reason (e.g., a natural disaster, an economic depression, or some other aberration), the State–again consistent with the principle of subsidiarity–may have a role in “stimulating those [business] activities where they are lacking,” by “supporting them in moments of crisis,” or by intervention when “monopolies create delays or obstacles to development.” In “exceptional circumstances,” and for limited time, even “exercise a substitute function.” (Compendium, No. 351)

Though there are times government intervention is required, there is a great danger to economic freedom that is posed by an overly-interventionist State, since invariably the prescriptions of the State end up being guided by “bureaucratic logic” and governed by burgeoning “public agencies.”  Therefore, any State or public intervention “must be carried out with equity, rationality, and effectiveness, and without replacing the action of individuals, which would be contrary to their right to the free exercise of economic initiative.” (Compendium, No. 354)

In general, the free market and the governing bodies of the State ought not to be viewed as competitors seeking to occupy the same realm, but as cooperators in the same aim:

“It is necessary for the market and the State to act in concert, one with the other, and to complement each other mutually.  In fact, the free market can have a beneficial influence on the general public only when the State is organized in such a manner that it defines and gives direction to economic development, promoting the observation of fair and transparent rules, and making direct interventions–only for the length of time strictly necessary–when the market is not able to obtain the desired efficiency and when it is a question of putting the principle of redistribution into effect.  There exist certain sectors in which the market, making use of the mechanisms at its disposal, is not able to guarantee an equitable distribution of the goods and services that are essential for the human growth of its citizens. In such cases the complementarities of State and market are needed more than ever.”  (Compendium, No. 353)

Finally, there are some human goods that simply are not commodities to be traded as if they were pork bellies. Well does the Church state that there are goods that “‘by their nature are not and cannot be mere commodities,’ goods that cannot be bought and sold according to the rule of the ‘exchange of equivalents’ and the logic of contracts which are typical of the market.” (Compendium, No. 349) (quoting Centesimus annus, 40)  These include “collective goods and goods meant for common utilization.” (Compendium, No. 356)  Marriage contracts, orphans, human corpses or organs, the freedom of religion or free speech ought not to be traded as if they were consumer goods.