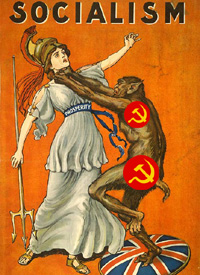 Put the worst possible construction on Mitt Romney’s career as a venture capitalist and it still looks much better than Barack Obama’s. Pecking at the entrails of a limping economy, Obama is the vulture socialist.

A president who promised to bankrupt the coal industry is in no position to gainsay Romney’s record of job creation at Bain Capital. Romney created at least 100,000 jobs in private life; Obama created none. Then Obama entered office and racked up a record of job destruction that would give even the most reckless corporate raiders pause.

The vulture socialists feed off an economy that they could never create. Parasitism defines their existence. To the extent that it exists, Obama’s moderation consists of keeping the golden goose of capitalism alive just long enough to pluck its eggs.

Were Obama to start an economy from scratch, it would look like the late Soviet Union’s. His de facto socialism is the spoiled and ungrateful child of Western capitalism. Take away the reviled rich and he would have no wealth to seize or workers to exploit.

Democrats and liberal pundits chortled over Romney’s remark that he enjoys firing people. Now we have got him, they purred. But in context the comment is blameless, as even the gaffe-prone Joe Biden acknowledged. What Romney obviously meant was that he likes the freedom to choose services. But to the vulture socialists who circle over companies dying from taxes and regulations choice is suspicious. They speak of economic freedom as an intrinsic crime.

Obama’s use of class warfare is pitiful. His hack adviser David Axelrod, dusting off this rhetoric, tried out the phrase “Bain mentality” the other day. This apparently is supposed to strike fear in the hearts of Americans.

Romney’s feeble Republican opponents, scrambling to find any available cudgel, speak darkly of Bain Capital too. Leave it to politicians of the GOP, justly called the Stupid Party by wags, to attack Romney not for his liberalism but for his capitalism. One can be conservative and condemn the excesses of free enterprise, but Newt Gingrich, Jon Huntsman, and Rick Perry haven’t even come close to proving that Bain Capital constituted one. Where is the evidence for Romney’s crass corporate raiding? That the New York Times says so? This is pathetic.

Newt and company had months to pop the wheels on the Romney juggernaut. But they just sat on their hands, letting the knives aimed at his liberalism rust. Now they content themselves with throwing pebbles at his passing caravan. Few primary voters care about Romney’s good-faith failures at Bain Capital, but they might have cared about his pro-choice past. Most probably don’t even know about it. In recent days, Gingrich has talked a bit about the Romneycare dollars that went to Planned Parenthood but not with anywhere near the same level of animation that he has devoted to the subject of Bain Capital.

Bitter that Romney’s supporters have portrayed him as a man of flabby character for his Inside-the-Beltway slumming, Gingrich had to find a similar line of character attack and hit upon Bain Capital as his only option. But who was going to take this seriously? Newt himself didn’t even take it seriously at first. In an interview with Fox’s Sean Hannity before the primaries, when Newt was still riding high in the polls, he mused in a moment of expansiveness that his comments about Bain were foolish and simply a result of Romney getting “under his skin.” Mitt “won that round,” a magnanimous Newt said.

Romney is still winning rounds, as voters can see that he is personally upstanding and that these lunges at his business record are nothing more than opportunistic hot air. Whether Romney’s streak can continue in the general election is an open question, but this much is clear: the vulture in the race will not be the Republican.