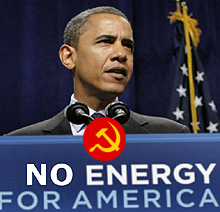 by Chad Stafko –
The energy policies of the Obama administration have made America less safe and have significantly contributed to our nation’s high unemployment rate and lackluster economic growth. At the same time, President Obama’s failure to expand our oil resources has led to higher prices at the gas pump for all Americans. In short, the Obama administration has been an utter failure in managing the energy sources of the United States.

The U.S. State Department recently delayed approval of the TransCanada Keystone XL pipeline until at least early 2013. This pipeline was to have run from Western Canada’s Alberta province all the way down to the U.S. Gulf Coast. It would have provided for 500,000-700,000 barrels of oil per day from Canada, one of our closest allies. But the Obama administration cowered to some protests of extremist environmentalists in Nebraska and thus decided to punt the decision until after the 2012 elections.

It’s been estimated that the TransCanada Keystone XL pipeline would have produced 20,000 jobs across the Midwest and South as well as 118,000 spin-off jobs.  These would have been real jobs created not by government loan or bailout, or by government program, but by a successful corporation located in our nearest neighbor to the north, and America’s largest trading partner.

Squandered was an opportunity to put high pay into the hands of working Americans to be distributed throughout communities from the Canadian border to the Gulf of Mexico.  This was exactly the project we needed during this time of lackluster economic growth.  But our president, with just over a year until the 2012 election, had his State Department decide to put politics ahead of working Americans by pandering to the environmentalists, who are certain to line his pockets with millions in campaign dollars, as they did leading up to the 2008 elections.

Not only does this TransCanada delay have a negative economic impact on America, but it also represents a lost opportunity to become less dependent on oil from the Middle East.  So instead of more oil flowing into the U.S. via a friendly neighbor, we will continue to rely on the same proportion of foreign oil that comes from nations in the Middle East.

In fact, it was Barack Obama who said earlier this year, “And when it comes to the oil we import from other nations, we can partner with neighbors like Canada, Mexico and Brazil, which recently discovered significant new oil reserves, and with whom we can share American technology and know-how.”

President Obama is apparently more interested in giving lip service to the idea of expanding our energy relationship with Canada.  Unfortunately, that same lip service has a negative impact on our national security.

Approximately 48% of our net oil imports are from OPEC nations, some of which would not be considered friends or allies of the United States.  We are dependent on hostile nations to run our nation’s economy and provide the fuel for our automobiles, tractor-trailers, etc.  Should OPEC suddenly decide to withdraw oil exports to the United States, it would be a disaster to our economy, and gas prices would skyrocket almost instantaneously.

Canada provides the most oil to the United States among any single nation (21%) and was willing to provide more through the TransCanada pipeline.  And, to counter the environmental protests against the TransCanda deal, pipelines are considered to be the safest mode of oil transportation, safer than truck or by tanker ship.  When oil spills occur, they are often spills of three barrels or less.

So, instead of that oil being transported into the United States, TransCanada is instead considering selling the oil from its oil sands to Asia, including the possibility of sending the oil to communist China.

But this TransCanada pipeline debacle is just par for the course for the Obama administration.

Recall President Obama’s knee-jerk reaction to the Deepwater Horizon explosion and resulting oil leak.  Obama enacted a moratorium on exploration in July 2010 which lasted for six months.  In addition to the disaster not having near the negative environmental impact as was thought, the moratorium itself caused massive economic damage to the region.  According to a study conducted by Louisiana State University professor Joseph Mason, the moratorium resulted in 19,000 jobs lost nationally and about $1.1 billion in lost wages.  Furthermore, Mason figured that the moratorium resulted in $350 million in lost federal tax revenue.

Like the TransCanada decision, Obama showed that priority number one in his energy policy is to take care of the environmentalist agenda first and then let the economic chips fall where they may.

Obama’s own Environmental Protection Agency has also had its hands in the disastrous energy policies of this administration.  A recent study projected that new EPA regulations would result in 183,000 jobs lost annually and double-digit increases in the cost of electricity for consumers and businesses.  That’s exactly what we don’t need during these economic times.

Since Barack Obama took office, gasoline prices have surged from $1.83 gallon to $3.39 gallon as of early November.  Someone who drives an average of 300 miles per week in a vehicle that gets twenty miles per gallon is paying around $30 more per week, or about $120 per month, more than he or she was when President Bush left office in January 2009.  This increase in prices results in less disposable income for consumers.  Multiply these reductions in disposable income by the millions of Americans who own automobiles, and we can see that the rise in gas prices under Barack Obama has had a substantial economic effect on our nation — especially given that consumer spending accounts for about 70% of our Gross Domestic Product.

Granted, a president cannot manipulate the price of oil and gas, but according to Politifact, “no other president saw such a price surge by this point of his presidency.”  Barack Obama could have agreed to open up the Arctic National Wildlife Refuge (ANWR) for drilling, and he could have given his State Department authority to proceed with the TransCanada pipeline, and he could have had his agencies allow more overall drilling permits, among other initiatives.  Any and all of these actions would have resulted in a gradual decline in oil prices long-term, all other factors held constant, and would have resulted in the need for less oil coming into the United States via the Middle East.

President Barack Obama has been a failure in his energy policies.  His mismanagement and foolish decisions have weakened our economy and made America more dependent on oil from the corrupt OPEC group and other nations that are hostile towards America.