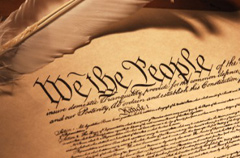 by Alan Sears –
On Sunday, October 2, hundreds of pastors all over the country did something an astonishingly large number of their fellow Americans had forgotten they had the God-given right to do: namely, address political issues and candidates during a worship service.

Across the nearly 60 years since then U.S. Senator Lyndon Johnson pushed through an amendment to the IRS code threatening any church or pastor who gets involved in politics with IRS reprisals – specifically, the loss of the church’s tax-exempt status – conventional wisdom has congealed around the idea that pastors must stay out of politics. As extraordinary as that assertion is to anyone with even a cursory knowledge of our nation’s history, it’s a theme that’s been hammered home unrelentingly for decades by groups like the American Civil Liberties Union and Americans United for Separation of Church and State.

As a result, pastors have been tacitly forbidden from saying in their pulpit what they’d be perfectly within their rights to say 50 feet away, in a church aisle or out on the sidewalk. What’s worse, they’ve been banned from expressing their opinion specifically because they are pastors.

Consider what happens when an issue such as, say, abortion, comes up for community debate, as the voting public considers a bill or assesses a candidate whose feelings on the subject are well known. Doctors will address their local medical gatherings, lawyers will argue at their bar associations, social workers will write op-eds, politicians will give speeches, and the news media will interview representatives of each of those professions, since some aspect of the abortion question impacts each of those professional areas.

In each case, the qualified professional is legally allowed, and even publicly encouraged, to address specifics of the issue, urge his peers to share his point of view, and advocate for or against a given candidate and his views.

And yet, while no sane person could suggest that abortion is an issue without a profound spiritual dimension, any effort by a local pastor to shine a biblical or theological spotlight on the issue in his professional setting, before an audience interested in that specific dimension, is met with outrage, tax threats, and the assertion that the Constitution forbids preachers from talking “politics.”

The same Constitution, mind you, whose First Amendment states that:

“Congress shall make no law respecting an establishment of religion, or prohibiting the free exercise thereof; or abridging the freedom of speech, or of the press …”

You’ll note the Founders did not bar Congress from “prohibiting the free exercise thereof (except in churches),” or “abridging the freedom of speech (except in the case of pastors),” or “of the press (unless it’s a printing or mailout distributed to church members to help them analyze candidates and issues).”

No one would be more astonished to hear the Constitution used as a legal muzzle to silence pastors on political issues than the men who wrote the Constitution. Most of them understood implicitly that the primary raison d’etre for settling this continent was to secure religious freedom, and that no group was more responsible for inspiring the colonists to join a revolution in defense of that liberty than pastors who addressed from their pulpits our “political issues” with England.

Nor would the Founding Fathers have stood for the notion that a church could be threatened with taxes. Tax exemption is not a privilege our government extends to cooperative congregations and ministries; it is the fundamental right of those churches, before God and the Constitution. What would be a more effective prohibition on the free exercise of religion than taxation? If the party in power holds the financial life of a church in its hands, how can that church ever stand against the party on a moral issue?

And make no mistake: every political question is, at root, a moral issue.

That, of course, is the underlying reason for every legal effort to silence and sabotage the participation of churches and pastors in the political process – the recognition that, on moral issues, those who take their faith seriously, and commit themselves as groups and individuals to the truth of Scripture, inevitably carry a different and often more substantial moral authority than the government and its elected leaders. And thank heaven they do. The moral admonitions of outspoken pastors have played a critical role at every critical juncture in our history – spearheading among other things the abolition of slavery and the Civil Rights movement.

If, to assert that moral authority, pastors must make a united stand through events like last Sunday’s “Pulpit Freedom Sunday,” they’re doing nothing more than what their own forefathers did 200-plus years ago. They’re throwing off not only the illegitimate legal shackles that would chain them to an unreasonable and ungodly silence, but the popular misconceptions that have for too long intimidated Christian leaders from sharing the enduring wisdom of a thoughtful, biblical perspective on the issues that most impact us as a nation.

Whatever your religious beliefs and convictions – or even your views about pastors talking politics – I hope you stood with the pastors of your community who dared to make bold and constructive use of our richest, and most endangered freedom: the right to hear and speak the truth.