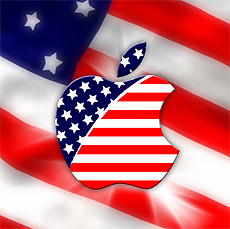 by Ed Feulner –
Steve Jobs, who died yesterday at the too-young age of 56, was a living refutation of all that liberals constantly tell us about our country — that we’re falling behind others and live now in a “post-American world,” as one of Barack Obama’s favorite books puts it in its title.

As anyone who’s ever handled an Apple product or had his life improved by the technological innovations our system has produced in just a decade (that means all of us) will tell you, Jobs and innovators like him epitomize that immeasurable quality the left somehow finds most abject — American exceptionalism.

The meme of the left is that drudgery and mediocrity is not just our future but probably also our just deserts–for being too imperialistic, consumerist, wasteful, patriarchal, or what have you. (For an inexhaustible list of all our ills and sins, please check with the mob gathered at the “Occupy Wall Street” protest.) One should compare this deadened vision with the wonders Jobs wrought.

Apple Computer, the company Jobs founded at the age of 21 along with his friend Steve Wozniak, was valued at the close of business yesterday at $350 billion and some change, more than $100 billion ahead of Microsoft. General Electric, another American giant, weighed in at less than half the price, $161 billion. Ford, GM and Volkswagen? Respectively, $40 billion, $35 billion and $42 billion. That should give some idea of where we are in the 21st century.

That beauty contest, how much a company is worth, is a result of decisions made by millions of investors voting with people’s savings (that is, for most of us, the sweat of our brow and our hedge against an uncertain future). Investors voted for Jobs’ company because consumers loved its products, and consumers bought Apple products not because they were ordered to do so by central planners but because they saw them as magic.

From computing to music to journalism, Jobs changed the way the world did its business and leisure. Very little of what we do today has not been impacted somehow by Jobs and his company. He certainly changed my life from my first Apple III with floppy discs almost 30 years ago, costing about $6000 and possessing a small fraction of the capabilities of my streamlined new iPad 2, all at less than 10 percent of the cost of that early dinosaur.

Macs, with their trademark coloring and sleek design, transformed the way people came to see computers, from gizmos only nerds understood or liked to things almost as organic as the partly bitten apples of the ever-present logos. Creative designing and thinking flowed naturally from a Mac, powering the creativity and productivity that have become the hallmark of the American economy, our present problems notwithstanding. In music, Jobs changed the industry by taking it digital.

As for journalism and reading in general, we have now gone back to where we started: the biblical tablet. The elegant slab we take with us wherever we go can do the same for us and take us, no matter where we are, anywhere in the universe our imagination wants to visit.

All this was the result of the happy coincidence of genius in an individual and a system. Jobs was an individual with special DNA, no question. But this half-Arab boy who was given up for adoption at birth and went on to drop out of college was able to transform the lives of individuals across the world because he lived and worked in this country.

The genius of the American system is comprised of the rule of law, respect for private property and the freedom of the individual to strive to be better than himself and his neighbor and reap the rewards that come from his innate abilities and effort. All of these and many other liberties are safeguarded in our Constitution. It is all part of what makes us an exceptional country.

This is not to say that we don’t have problems. We are indeed falling behind — not behind other countries but behind our promise and potential. Our government spends too much, tries to tell us how to run our private lives, and ties down in red tape the genius that brought you Apple. The great and sometimes cacophonous debate we are having in our country at the moment results from the fact that Americans have finally woken up to the threat our system confronts and are doing something about it.

This is not what you hear. Daily we are told by our government leaders, the media, and academia that we are as exceptional only in the way that every other country on the U.N. roll, from Albania to Zimbabwe, is exceptional. We are told that we have to manage our decline as a power and that the great debate over ideas that we’re having is evidence that “our politics is broken.” Typically, a columnist from a Manhattan paper has titled his most recent book That Used to Be Us, a line, we’re sad to say, that came straight from a speech by Barack Obama.

This is nonsense. Steve Jobs may have given to liberal causes and politicians throughout his life, but his life proved the existence of the American Dream. As anyone who’s Googled something in her iPad and then Tweeted about it will tell you, Steve Jobs and those like him symbolize American Exceptionalism every day.