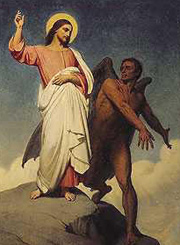 Do you ever feel like you are in spiritual warfare? The devil doesn’t usually attack us in such blatant, physical ways as he did St. Anthony, but we must remember that he is always seeking to make war against us. So what are we to do? Arm ourselves, right? But with what? How do we anticipate the devil’s attacks against us, especially when they are so deviously subtle and often approach us in the disguise of seemingly ordinary life situations and decisions?

DENVER, CO (Catholic Online) – He sold everything he owned and he went into the desert to fight demons. He burned with a desire for God, and “the devil, an enemy of the word Christian, could not bear to see such outstanding virtues in a young man and so he attacked him” (from Early Christian Lives, the “Life of Antony by Athanasius”).

Spiritual warfare. We see it lived out to the extreme in the life of St. Anthony, early anchorite monk and fierce warrior of demons, all for the glory of God and the prayerful protection of men. Obviously, most of us are not called to rid ourselves of all our possessions and become hermits in a foreign desert (at least I’m not.), but we all experience spiritual warfare like St. Anthony, though often in different and subtler degrees.

St. Athanasius, in his writings on the “Life of Antony,” explained the reality of what (or whom) Anthony was up against. The devil and his demons literally beat Anthony, torturing him in every physical and spiritual way possible in order to break his spirit and unwavering devotion to God. But echoing the words of St. Paul, Anthony knew, “when I am weak, then I am strong” (2 Cor 12:10). The words of Psalm 27 also strengthened his resolve to win spiritual battles for Christ’s sake: “Though a host encamp against me, my heart shall not fear; though war arise against me, yet I will be confident” (Ps 27:3). What courage! He was able to take on hosts of the devil’s minions, armed with the power of God-which will always conquer.

Are we at war?
“For we are not contending against flesh and blood, but against the principalities, against the powers, against the world rulers of this present darkness, against the spiritual hosts of wickedness in the heavenly places” (Ephesians 6:12).

Do you ever feel like you are in spiritual warfare? The devil doesn’t usually attack us in such blatant, physical ways as he did St. Anthony, but we must remember that he is always seeking to make war against us. So what are we to do? Arm ourselves, right? But with what? How do we anticipate the devil’s attacks against us, especially when they are so deviously subtle and often approach us in the disguise of seemingly ordinary life situations and decisions?

St. Anthony’s advice for the friends of his day certainly ring true for us still. “My friends,” Anthony advised, “a pure and fearless faith in God are powerful weapons against the demons.when you see them, protect yourselves with the sign of the cross and immediately they will dissolve into nothing for they fear that sign of victory by which the Savior, depriving them of their powers of the air, has shown them up.What room for hesitation can now remain, my children? What fear can there be any longer?…When they see that our hearts are fortified in Christ, they turn back in confusion.”

A practical tip to help “fortify our hearts in Christ”
There is a common practice done by the saints to strengthen their hearts for spiritual warfare. By the world’s standards, this practice looks like it would weaken one’s bodily strength, rather than provide all of the energies one needs to go into battle without fear. To be honest, many of us shrink away at the mention of this practice. The word sends a little chill down the spine, since we are creatures of comfort and this is all about discomfort: fasting.

It seems like we talk a whole lot about fasting during Lent, and we practically forget about it (or intentionally ‘forget’ about it) during the other 325 days of the year. But practicing self-denial and self-discipline is one of the greatest-and, surprisingly, one of the most energizing-spiritual practices in the Church. Did you know that it is recommended that we fast in some way on all Fridays, not just Fridays during Lent? Fasting is meant to help us fight against temptation and energize us for spiritual battle. We should all try to incorporate fasting more into our spiritual lives.

Fasting doesn’t have to always mean eating less during the day. Be creative. Fast from things that bring you comfort: watching a television show you like, listening to the radio in the car, having your beloved morning cup of coffee. You can also fast by “giving up” time. Perhaps you can exchange something you want to do during the day for something that you really should do, like calling a relative to see how they are doing, making a meal for a friend going through a difficult time, etc.

Fasting from temporal pleasures helps turn our sights to the greater pleasures-the eternal ones-and to the virtues. St. Anthony talks about the need for “trampling on all that is transitory.” Sure this will cause discomfort, and sometimes a little bit of pain, but the great monastic recognized the truth of Romans 8:18: “I consider that the sufferings of this present time are not worth comparing with the glory that is to be revealed to us.”

Find us ready
You will be engaged in spiritual warfare for the rest of your earthly life. This is a fact you should know and never forget, so you can be prepared for it and do something about it. Arm yourself, and realize what a privilege it is to fight on the side that always wins. You are not alone. A voice came to St. Anthony saying, “Antony, I was here, but I was waiting to watch your struggle. But now, since you have bravely held your own in this fight, I will always help you.”

After all, “we know that in everything God works for good with those who love him, who are called according to his purpose” (Romans 8:28).