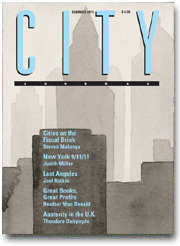 The ferocious criminality exhibited by an uncomfortably large section of the English population during the current riots has not surprised me in the least. I have been writing about it, in its slightly less acute manifestations, for the past 20 years. To have spotted it required no great perspicacity on my part; rather, it took a peculiar cowardly blindness, one regularly displayed by the British intelligentsia and political class, not to see it and not to realize its significance. There is nothing that an intellectual less likes to change than his mind, or a politician his policy.

Three men were run over and killed as they tried to protect their property in the very area of Birmingham in which I used to work, and through which I walked daily; the large town that I live near when I’m in England has also seen rioting. Only someone who never looked around him and never drew any conclusions from the faces and manner of the young men he saw would have been surprised.

The riots are the apotheosis of the welfare state and popular culture in their British form. A population thinks (because it has often been told so by intellectuals and the political class) that it is entitled to a high standard of consumption, irrespective of its personal efforts; and therefore it regards the fact that it does not receive that high standard, by comparison with the rest of society, as a sign of injustice. It believes itself deprived (because it has often been told so by intellectuals and the political class), even though each member of it has received an education costing $80,000, toward which neither he nor—quite likely—any member of his family has made much of a contribution; indeed, he may well have lived his entire life at others’ expense, such that every mouthful of food he has ever eaten, every shirt he has ever worn, every television he has ever watched, has been provided by others. Even if he were to recognize this, he would not be grateful, for dependency does not promote gratitude. On the contrary, he would simply feel that the subventions were not sufficient to allow him to live as he would have liked.

At the same time, his expensive education will have equipped him for nothing. His labor, even supposing that he were inclined to work, would not be worth its cost to any employer—partly because of the social charges necessary to keep others such as he in a state of permanent idleness, and partly because of his own characteristics. And so unskilled labor is performed in England by foreigners, while an indigenous class of permanently unemployed is subsidized.

The culture of the person in this situation is not such as to elevate his behavior. One in which the late Amy Winehouse—the vulgar, semicriminal drug addict and alcoholic singer of songs whose lyrics effectively celebrated the most degenerate kind of life imaginable—could be raised to the status of heroine is not one that is likely to protect against bad behavior.

Finally, long experience of impunity has taught the rioters that they have nothing to fear from the law, which in England has become almost comically lax—except, that is, for the victims of crime. For the rioters, crime has become the default setting of their behavior; the surprising thing about the riots is not that they have occurred, but that they did not occur sooner and did not become chronic.

Theodore Dalrymple, a physician, is a contributing editor of City Journal and the Dietrich Weismann Fellow at the Manhattan Institute.

1 thought on “British Degeneracy on Parade”