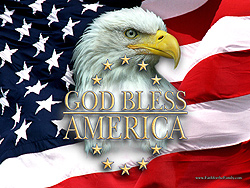 by Chuck Colson –
The great British intellectual G. K. Chesterton wrote that “America is the only nation in the world that is founded on [a] creed.”

Think about that for a moment. Other nations were founded on the basis of race, or by the power of kings or emperors who accumulated lands—and the peasants who inhabited those lands.

But America was—and is to this day—different. It was founded on a shared belief. Or as Chesterton said, on a creed.

And what is that creed that sets us apart? It is the eloquent, profound, and simple statement penned by Thomas Jefferson in the Declaration of Independence:

“We hold these truths to be self-evident, that all men are created equal, that they are endowed by their Creator with certain unalienable rights, that among these are life, liberty and the pursuit of happiness.”

I’ll never forget when I graduated from Brown University during the Korean War. I couldn’t wait to become a Marine officer, to give my life if necessary, to defend that creed. To defend the idea that our rights come from God Himself and are not subject to whims of governments or tyrants. That humans ought to be free to pursue their most treasured hopes and aspirations.

Perhaps some 230 years later, we take these words for granted. But in 1776, they were earth-shaking, indeed, revolutionary.

Yet today, they are in danger of being forgotten altogether. According to Gallup, 66 percent of American adults have no idea that the words, “We hold these truths . . .” come from the Declaration of Independence. Even worse, only 45 percent of college seniors know that the unalienable rights of life, liberty, and the pursuit of happiness are proclaimed in the Declaration.

As America grows more and more diverse culturally, religiously, ethnically, it is critical that we embrace the American creed. Yes, America has always been a “melting pot.” But what is the pot that holds our multicultural stew together? Chesterton said the pot’s “original shape was traced on the lines of Jeffersonian democracy.” A democracy founded on those self-evident truths expressed in the Declaration of Independence. And as Chesterton remarked “The pot must not melt.”

Abraham Lincoln understood this so well. For him, the notion that all men are created equal was “the electric cord in that Declaration that links the hearts of patriotic and liberty-loving men together, that will link those patriotic hearts as long as the love of freedom exists in the minds of men throughout the world.”

So go to the Fourth of July parade. Go to the neighborhood barbecue and enjoy the hot dogs and apple pie.

But here’s an idea for you. Why not take time out at the picnic to read the Declaration of Independence aloud with your friends and neighbors.

Listen—and thrill—to those words that bind us together as a nation of freedom-loving people: We hold these truths to be self-evident, that all men are created equal, that they are endowed by their Creator with certain unalienable rights, that among these are life, liberty and the pursuit of happiness.

These are the words that Americans live for—and if necessary, die for.