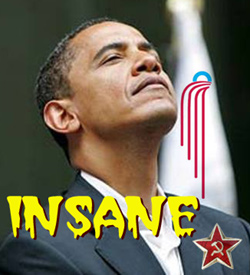 by Carol Peracchio –
One of the benefits of having been a nurse for over thirty years is that people will occasionally allow me to be brutally honest. For example, I can get away with telling an acquaintance, “God did not create gastric reflux medication just so you can eat an entire pizza and then go lie on the couch like a beached whale.”

Until recently, I was willing to believe that President Obama and his party were merely way-out-leftists, even Marxists. But after listening to their response to last week’s horrific economic news, I can only conclude that today’s Democratic Party has lost its collective mind. In this nurse’s expert opinion, Obama and the Democrats are crazy.

By “crazy,” I mean looney, batty, daft, bonkers, and nutty as a fruitcake, to put it in medical terms.

On Friday, we learned that the recovering American economy added a piddling 18,000 jobs in June and that the unemployment rate rose to 9.2%. The underemployment rate jumped to 16.2%. Americans based in reality were not surprised. Contrary to the reactions of professional economists, these numbers were hardly “unexpected” to us. After all, chances are that we are unemployed or underemployed, or else we love someone who is one or the other.

But the economic picture is very different on Planet Democrat. In his comments last Friday after receiving the dismal jobs report, President Obama actually suggested:

Right now, there are over a million construction workers out of work after the housing boom went bust, just as a lot of America needs rebuilding. We connect the two by investing in rebuilding our roads and our bridges and our railways and our infrastructure. And we could put back to work right now some of those construction workers that lost their jobs when the housing market went bust.

Only a crazy person would insist that we raise taxes in a recession.

That statement is indicative of a person suffering from delusions and a lack of short-term memory. After a trillion dollars in stimulus spending a mere year and a half ago that didn’t work, President Obama suggests…more stimulus!

Today in Washington, Republicans are attempting to negotiate with the president and the Democrats on raising the debt ceiling. Why bother? Any sane adult will tell them: it is impossible to negotiate with a crazy person. And it’s obvious to every rational American that today’s leading Democrats are crazy.

Only a crazy person would insist that we raise taxes in a recession.

Only a crazy person would tell us that Social Security is just fine.

Only a crazy person believes that people won’t vote based on the unemployment rate.

Occasionally in my work in emergency and intensive care nursing, I would be assigned a patient who was delusional in addition to whatever physical trauma or disease brought him to the hospital. These patients are challenging, to say the least. I quickly learned that if the two of us were going to make it through the shift, there were some very important ground rules.

First, the nurse must accept that the patient is delusional, and therefore a lot of the things he “knows” are not based in reality and therefore not true. Asking a delusional patient who sees a giant pink bunny in the corner what medications he takes is not the best way to gather information. Asking a Democrat who believes that the rich are not paying their fair share to come up with a budget that makes sense is ludicrous.

it is impossible to compromise with a person who is not in touch with reality.

Second, it is impossible to compromise with a person who is not in touch with reality. Hospital staff can’t realistically make a discharge plan with a patient who believes she lives in Buckingham Palace. Likewise, Republicans can’t compromise with any delusional Democrat who, for example, actually believes that the 14th amendment gives the president the authority to raise the debt ceiling all by himself.

Third, it’s important to avoid validating the patient’s delusions by arguing about them. In nursing school, we were taught to say, “I understand that the penguin at the foot of the bed is very real to you. But I don’t see it.” Then simply get on with your job. Republicans need to stop wasting their breath trying to prove to crazy liberals that Medicare is going broke. Republicans will never win that argument, because the two sides are working from different solar systems. Republicans work from reality. Liberals live on Planet Democrat.

I’ve always been fascinated by how differently we treat crazy people who happen to be rich and/or powerful as opposed to the run-of the-mill nut found in everybody’s family or workplace. Examples abound, from Howard Hughes to Michael Jackson to Charlie Sheen. Famous lunatics are surrounded by people whose livelihood depends on the crazy person. These sycophants are thus charged with keeping the famous person’s more outrageous statements and antics under wraps. Should the crazy famous person actually find his way to a microphone or camera, the sycophants’ responsibility is to spin the incoherency of the crazy person into something resembling rationality.

Crazy Democrats have sycophants. They are known as the mainstream media.

Crazy Democrats have sycophants. They are known as the mainstream media. With Obama’s election, the press fully embraced its role of publicist to the looney left. The president’s statements are tightly scripted and confined to his teleprompter, even when speaking at a grade school. Official business is conducted out of sight. (Note how all the debt negotiations with President Obama are being held in secret.) Should a crazy Democrat’s lunacy actually be disseminated unfiltered, the press stand at the ready to explain, obfuscate, and, if all else fails, attack the messenger.

So as I observe the ongoing negotiations on raising the debt ceiling, I have to express great admiration for Speaker of the House John Boehner. I understand that many conservatives are disappointed in the speaker, wishing that he could bring the president and the Democrats to our side of the table. But how can Boehner do that when the crazy Democrats are at a fictional table on another planet?

No, John Boehner appears to be doing what a good nurse would do: get to the end of shift with as little damage as possible. In the speaker’s case, that means no tax increases. Here’s hoping he’s able to stand firm. The bad news is that the shift isn’t over until November 2012.