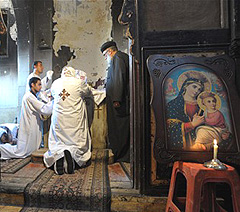 “There is some hidden hand behind this, whether from inside the country or outside it.”

The street battles, which began on Saturday evening outside his church, demonstrated the breakdown in law and order in parts of Egypt that began during the uprising that overthrew President Hosni Mubarak in February.

The police failed to intervene, while Fr Cherubim said that, after several hours, the army moved in to protect the church but not the surrounding buildings, and refused to try to break up the warring sides.

Sectarian violence has increased in Egypt. It began with a church bombing in Alexandria before the uprising began, but has worsened since.

A large gang of Salafi Muslims – followers of a purist sect to which most Islamist terrorist groups are aligned – led the attack on St Mena’s, claiming a Christian woman who had converted to Islam to marry a Muslim was being held inside against her will.

“They performed evening prayer 200 metres from the church and after they finished they started shouting ‘We want you to leave’, meaning the Copts,” Fr Cherubim said.

“Are we not citizens? Are we foreigners? Should we leave this country now and go away?”

The Christian and Muslim sides disagree about who began the escalation of protests. Local Muslims said it was a local Christian café owner who fired a gun into the air.

But both sides brought out guns, including rifles, and fired from the closely packed, brick-built blocks lining the street. As the night progressed, a stream of injured poured into the church.

Five Christians died in or around the church, including Rami Radian, 23, who was keeping lookout from the bell tower and was hit by a sniper.

Six Muslims died outside on Al-Mashoe Street. After the army sealed it, the mob moved on to the nearby Church of the Virgin Mary, burned it to the ground and beat the watchman to death.

Abdul Moneim al-Shahad, a spokesman for the Dawa Salafi movement, said it opposed all violence.

But he said Muslims were angry at the church’s refusal to hand over women who convert to Islam so that they can divorce their husbands, which the Coptic church makes difficult.

Salafis and even the once-banned Gamaa Islamiya, which was responsible for terrorist attacks on tourists in the 1990s, have been more prominent since the downfall of Mr Mubarak, announcing they would back candidates at forthcoming elections.

A group of Salafis held a prayer vigil for Osama bin Laden last week, despite attempts by the army to stop them. Egyptian newspapers yesterday claimed that the riots were being deliberately orchestrated by elements of the old regime still loyal to Mr Mubarak, eager to make his warnings that without him there would be chaos come true.

The Supreme Military Council, which replaced him, is promising an “iron fist” to end the discord, but Ali Gomaa, the country’s Grand Mufti, or senior Islamic scholar, warned there was a potential for civil war.

“Outlaws want to defy the authority of the state,” he said.

1 thought on “Egyptian Christians Are ‘Under Organised Attack’ from Muslims”