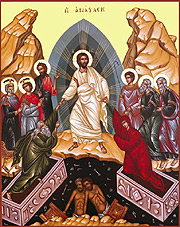 by Mark Tooley
Hundreds of millions of Christians will celebrate the resurrection of Jesus Christ on Easter Sunday. And after a century and a half of liberal Protestant attempts to redefine the resurrection into merely a metaphor, the vast majority of Christians still believe that Christ’s body physically arose. Revisionist theologians still find airtime on the History Channel or PBS, but their project never gained a mass following. Even most secular media coverage about religion today focuses largely on orthodox expressions of Roman Catholicism or evangelical Protestantism. Whatever their own beliefs, most reporters and pundits intuit that rationalist liberal theology does not command a lot of adherents.

The Jesus Seminar, founded in 1985 to adjudicate over which Scriptures were historically accurate, and which always excluded any talk about miracles, once gained widespread attention for its routine objections to traditional Christian belief “Christ’s Body Actually Eaten by Wild Dogs!” was a typical headline from a Jesus Seminar gathering, where liberal scholars would vote with color marbles over which biblical verses were valid. Eventually these self-selected academics ran out of incendiary claims, and the media mostly stopped heeding their pronouncements after founder Robert Funk died in 2005, if not well before. Co-founder and former Roman Catholic priest John Dominic Crosson, now about 76 years old, still soldiers on. He and other kindred academics routinely speak around the nation, gathering usually small audiences of gray-headed, mostly retired clergy. Of course, the Jesus Seminar skeptics insist notions about a divine Jesus being born of a virgin or rising from the dead were self-servingly and dogmatically imposed by the later church. They themselves typically and dogmatically assert Christianity’s unqualified support for a redistributive welfare state, sexual liberation, and opposition to the American “empire.”

Another aging survivor of the Jesus Seminar is nearly 80 year old retired Episcopal Church Bishop John Shelby Spong, though his fame preceded his induction. In the 1980s and 1990s, while Bishop of Newark, Spong penned books speculating that the Virgin Mary was a prostitute impregnated by a Roman soldier, and that St. Paul was a self-hating homosexual, among other saucy assertions that once gained headlines but now excite yawns. He earned audiences with Phil Donahue and other breathless talk show hosts, most of whom are now themselves faded from view. Spong always claimed that “fundamentalist,” i.e. orthodox Christianity, was dying, and he was its savior. That his New Jersey diocese lost 40 percent of its members while he was providing enlightened leadership as bishop never seemed to provoke self-reflection. One bemused observer who recently went to hear him speak at a New Jersey college campus remarked he was able to locate the event by following the trail of “old people.” Liberal revisionism was always mainly the project of upper middle class, white Mainline Protestants, with advanced degrees and a certain disdain for the ostensibly superstitious masses who heed a more literal version of Christianity. The evangelical mega-churches of today’s America, not to mention the surging faith of Global South Christianity, especially in Africa, usually befuddle and irritate this audience, most of whom are now long retired.

Spong still runs a website for airing his revisionist prognostications, charging $9.95 every three months for subscribers. He tut-tuts about the “fundamentalists” who still believe in a physical resurrection of Jesus and concludes that “something of enormous power gripped the disciples following the crucifixion that transformed their lives.” But it was “some fifty years before that transforming experience was interpreted as the resuscitation of a three days dead Jesus to the life of the world.” About a decade ago, Spong rejected “theism,” i.e., belief in a personal God, which was the logical outcome of his ultra-rationalist rejection of everything supernatural. His website makes for grim reading, especially on Easter and Christmas.

Another Jesus Seminar scholar with a little longer shelf-life is Marcus Borg, who, at about age 68, represents the seminar’s virtual youth wing. In some contrast to Spong’s hyper Enlightenment faith in reason and science, Borg is more postmodern and mystical, open to the possibility of miracles and even an afterlife. He describes himself as a panentheist who believes that everything is a part of God, unlike strict pantheism, which asserts everything is God. Despite his mostly rejection of absolute truth, he is still adamant that Christian orthodoxy must be wrong, and that Jesus did not literally rise from the dead. He is open to “visions” and “numinous” experiences with Jesus. Recently Borg wrote: “The central meaning of Easter is not about whether something happened to the corpse of Jesus. Its central meanings are that Jesus continues to be known and that he is Lord. The tomb couldn’t hold him. He’s loose in the world. He’s still here. He’s still recruiting for the kingdom of God.” An Episcopalian, Borg often understands God’s Kingdom to be about advocacy of left-leaning political projects.

A friendly debating partner to Borg is Church of England Bishop and scholar N. T. Wright, who affirms the orthodox understanding of Jesus’ resurrection. In his book The Resurrection of the Son of God, Wright wrote: “No wonder the Herods, the Caesars and the Sadducees of this world, ancient and modern, were and are eager to rule out all possibility of actual resurrection. They are, after all, staking a counter-claim on the real world. It is the real world that the tyrants and bullies (including the intellectual tyrants and bullies) try to rule by force, only to discover that in order to do so they have to quash all rumours of resurrection, rumours that would imply that their greatest weapons, death and deconstruction, are not after all omnipotent.”

These “intellectual tyrants” were long ascendant in liberal Protestant academia for over a century. Despite their decades of turgid exertions, the fully resurrected Jesus remains as captivating as ever. Happy Easter!