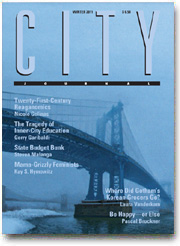 Here’s my prediction: the money, the reforms, the gleaming porcelain, the hopeful rhetoric about saving our children—all of it will have a limited impact, at best, on most city schoolchildren. Urban teachers face an intractable problem, one that we cannot spend or even teach our way out of: teen pregnancy. This year, all of my favorite girls are pregnant, four in all, future unwed mothers every one. There will be no innovation in this quarter, no race to the top. Personal moral accountability is the electrified rail that no politician wants to touch.

My first encounter with teen pregnancy was a girl named Nicole, a pretty 15-year-old who had rings on every finger and great looped earrings and a red pen with fluffy pink feathers and a heart that lit up when she wrote with it. Hearts seemed to be on everything—in her signature, on her binder; there was often a little plastic heart barrette in her hair, which she had dyed in bright hues recalling a Siamese fighting fish. She was enrolled in two of my classes: English and journalism.

My main gripe with Nicole was that she fell asleep in class. Each morning—bang!—her head hit the desk. Waking her was like waking a badger. Nicole’s unmarried mother, it turned out, worked nights, so Nicole would slip out with friends every evening, sometimes staying out until 3 am, and then show up in class exhausted, surly, and hungry.

Personal moral accountability is the electrified rail that no politician wants to touch.

After a dozen calls home, her mother finally got back to me. Your daughter is staying out late, I reported. The voice at the other end of the phone sounded abashed and bone-weary. “I know, I know, I’m sorry,” she repeated over and over. “I’ll talk to her. I’m sorry.”

For a short time, things got better. Nicole’s grades started to improve. Encouraged, I hectored and cajoled and praised her every small effort. She was an innately bright girl who might, if I dragged her by the heels, eventually survive the rigors of a community college.

Then one morning, her head dropped again. I rapped my knuckles on her desk. “Leave me alone, mister,” she said. “I feel sick.”

There was a sly exchange of looks among the other girls in class, a giggle or two, and then one of them said: “She’s pregnant, Mr. Garibaldi.”

She lifted her face and smiled at her friends, then dropped her head back down. I picked up my grimy metal garbage can and set it beside her desk, just in case. A moment later she vomited, and I dispatched her to the nurse. In the years since, I’ve escorted girls whose water has just broken, their legs trembling and wobbly, to the principal’s office, where their condition barely raises an eyebrow.

Within my lifetime, single parenthood has been transformed from shame to saintliness.

Within my lifetime, single parenthood has been transformed from shame to saintliness. In our society, perversely, we celebrate the unwed mother as a heroic figure, like a fireman or a police officer. During the last presidential election, much was made of Obama’s mother, who was a single parent. Movie stars and pop singers flaunt their daddy-less babies like fishing trophies.

None of this is lost on my students. In today’s urban high school, there is no shame or social ostracism when girls become pregnant. Other girls in school want to pat their stomachs. Their friends throw baby showers at which meager little gifts are given. After delivery, the girls return to school with baby pictures on their cell phones or slipped into their binders, which they eagerly share with me. Often they sit together in my classes, sharing insights into parenting, discussing the taste of Pedialite or the exhaustion that goes with the job. On my way home at night, I often see my students in the projects that surround our school, pushing their strollers or hanging out on their stoops instead of doing their homework.

In today’s urban high school, there is no shame or social ostracism when girls become pregnant.

Connecticut is among the most generous of the states to out-of-wedlock mothers. Teenage girls like Nicole qualify for a vast array of welfare benefits from the state and federal governments: medical coverage when they become pregnant (called “Healthy Start”); later, medical insurance for the family (“Husky”); child care (“Care 4 Kids”); Section 8 housing subsidies; the Supplemental Nutrition Assistance Program; cash assistance. If you need to get to an appointment, state-sponsored dial-a-ride is available. If that appointment is college-related, no sweat: education grants for single mothers are available, too. Nicole didn’t have to worry about finishing the school year; the state sent a $35-an-hour tutor directly to her home halfway into her final trimester and for six weeks after the baby arrived.

In theory, this provision of services is humane and defensible, an essential safety net for the most vulnerable—children who have children. What it amounts to in practice is a monolithic public endorsement of single motherhood—one that has turned our urban high schools into puppy mills. The safety net has become a hammock.

The safety net has become a hammock.

The young father almost always greets the pregnancy with adolescent excitement, as if a baby were a new Xbox game. In Nicole’s case, the father’s name was David. David manfully walked Nicole to class each morning and gave her a kiss at the door. I had him in homeroom and asked if he planned to marry her. “No” was his frank answer. But he did have plans to help out. David himself lived with his mother. His dad had served a short sentence in prison for drug possession and ran a motorcycle-repair shop somewhere upstate. One afternoon, David proudly opened his father’s website to show me the customized motorcycles he built. There he was, the spit and image of his son, smiling atop a gleaming vintage Harley, not a care in the world.

Boys without fathers, like David, cultivate an overweening bravado to overcome a deeper sense of vulnerability and male confusion. They strut, swear, and swagger. There’s a he-man thing to getting a girl pregnant that marks you as an adult in the eyes of your equally unmoored peers. But a boy’s interest in his child quickly vanishes. When I ask girls if the father is helping out with the baby, they shrug. “I don’t care if he does or not,” I’ve heard too often.

As for girls without fathers, they are often among my most disruptive students. You walk on eggshells with them. You broker remarks, you negotiate insults, all the while trying to pull them along on a slender thread. Their anger toward male authority can be lacerating. They view trips to the principal’s office like victory laps. …