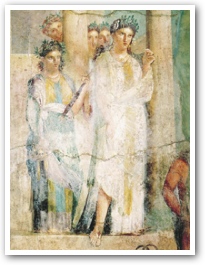 by Mike Aquilina –
We’ve come a long way, baby. And we’ve ended up back where we started before the rise of Christianity. In the Church’s infancy, the age of the Fathers, abortion and infanticide were commonplace events, requiring little deliberation. Archeology has yielded us a rare glimpse at the inner life of ordinary people in this time. We have a letter from a pagan businessman in which he wrote home to his pregnant wife, amid the usual endearments: “If you are delivered of a child [before I come home], if it is a boy, keep it, if a girl discard it.”

Indeed, most pagan cultures considered it a duty to place “defective” newborns on the dunghills at the edge of town, where birds of prey could pick them apart. Most families interpreted the word “defective” broadly, to include female children as well as those with disabilities or disfigurement. Plato and Aristotle commended the practice, and the Roman historian Tacitus said it was “sinister and revolting” for Jews to forbid infanticide.

Yet these practices created a crisis for pagans. Abortion and infanticide led to low fertility rates, high maternal mortality, a shortage of marriageable women, and an absence of familial care for the elderly. Over generations, the dwindling native population of Rome grew increasingly dependent on foreign mercenaries to fill the ranks of the army, and immigrants to do the servile jobs that no Roman citizen wanted to do. That makes for an unstable infrastructure. Various emperors tried to legislate fertility, but the law isn’t much of an aphrodisiac. And abortion kills a couple’s love every bit as much as it kills their baby. Besides, people had grown accustomed to an unmoored, leisurely life, drifting from pleasure to pleasure, without the encumbrance of children.

We face a similar crisis today. Christianity’s critics say they want to promote a tolerant, welcoming, inclusive society. What they usually mean is a society that gives free rein to every vice, every cruel lust, and every sin. But a growing number of people are dissatisfied with the societal consequences of those sins. What’s a culture to do?

Christianity’s critics say they want to promote a tolerant, welcoming, inclusive society. What they usually mean is a society that gives free rein to every vice, every cruel lust, and every sin.

We Christians have answers. Around 155 A.D., St. Justin Martyr wrote to the emperor: “We have been taught that it is wicked to expose even newly born children . . . For we would then be murderers.” In the same century, Athenagoras said: “Women who use drugs to bring on an abortion commit murder.” These testimonies appear late in the game, a half-century after the earliest recorded Christian condemnation of abortion.

We, too, are living rather late in the game, but not too late to speak up and speak plainly. No society can grow if it snuffs out life in the seed or in the bud. No society can be inclusive if it refuses to welcome the most vulnerable persons. It was Christians who created the first truly tolerant, welcoming, and all-inclusive society — with a remarkable social-welfare system. They did this because they, unlike their rulers, not only tolerated the poor and weak, nor merely loved them with a human affection. They saw the least of the human family as the image of God, as Christ who must be welcomed, as angels requiring hospitality.

I’ve quoted the Didascalia Apostolorum here before, but that’s OK. We need to memorize this line as if it were the first catechism lesson: “Widows and orphans are to be revered like the altar.”

1 thought on “A culture exposed”