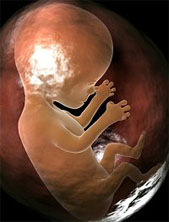 12/3/2010 – Dave Andrusko –
Since we are approaching the Christmas season, I have vowed to be extra-civilized toward people whose attitude and behavior I find extra-uncivilized. What makes it easier is that so often there is little I can add to their own words that would reveal more about whom they are and where they are coming from.

We learn that there are two filmmakers who are producing a honorific documentary about the two most infamous “late-term” abortionists in the world: LeRoy Carhart –who reportedly has moved his late-term abortion business from Nebraska when the state said he couldn’t kill unborn babies capable of feeling pain which lawmakers have recognized as beginning at 20 weeks– and Warren Hern –most famous for (in referring to his own abortion technique) the remarkable statement that “there is no possibility of denial of an act of destruction by the operator. It is before one’s eyes. The sensation of dismemberment flows through the forceps like an electric current.”

This is the same Hern who once got into a heated exchange of letters over the proposed ban on partial-birth abortions. In the course of the back and forth Hern said that he did personally use this method. To which NRLC Legislative Director Douglas Johnson responded, “He neglects to mention that this is because he prefers methods that involve the progressive dismemberment of the well-developed unborn child” (dilation and extraction).

“there is no possibility of denial of an act of destruction by the operator. It is before one’s eyes. The sensation of dismemberment flows through the forceps like an electric current.”

They are so outlandish you really can’t caricature what these people say or do– in this case filmmakers Martha Shane and Lana Wilson. (The working title of their documentary is “Trust Women.”)

They told Women’s Media Center that they need all the money they can get, since they are only a third of the way through shooting. One way to finance their hosanna to “late-term” abortions is to sell buttons with the insignia “Trust Women.”

But they also have other, more creative fundraising ideas. “We’re also sending condom bouquets,” Shane explained, pointing to an arrangement in a vase across the table–several condoms wrapped together with pipe cleaner stems. Wilson nodded. “Maybe we can sell them as limited edition artworks.”

Nor am I making up the two-fold strategy for demonstrating the sheer goodness of what Carhart and Hern do for a living (so to speak).

There is the usual disinformation–that “late-term” abortions are practically only done for the most heart-rending of reasons. This canard was disproved during the long, LONG debate over partial-birth abortion.

The other approach is to tell us how genuinely wholesome both men are –Carhart is an Air Force veteran who is “Christian and religious,” while Hern was a Peace Corp volunteer. Would such men really be likely to do something….unacceptable?

If you have any doubts, we’re told the Carhart is so scrupulous in ensuring that women really do want to abort that he claims he “turns away more women than the protesters do.”

So why are Wilson and Shane making the documentary? Carhart and Hern are 68 and 72, respectively, and could represent “the end of an era.” So their goals are to use the film to proselytize in medical schools and to “influence a broad audience, including legislators, and hope the film will help to prevent other states from following Nebraska’s post-20 weeks ban.”

Indeed “our modest goal,” Shane “said, is to “really affect the conversation about abortion in the United States.”

They are on to a basic truth about human nature. If you “tell stories” (as they like to describe what they are about) that are warm enough, compelling enough, and avoid what’s being done to whom enough, an audience can be duped.

But that’s why you and I are here. To make sure the truth wiggles its way out from beneath a blanket of omissions and distortions. And because you have, you already have “really affected the conversation about abortion in the United States.”