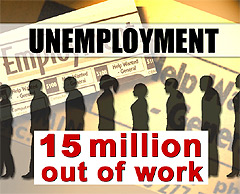 Last week the Obama administration began rolling out new campaign titled, we kid you not, “Yes, we did.” Did what exactly? Waste nearly a trillion dollars on an economic stimulus that by every objective measure has completely failed to perform as advertised? Then yes you did. A new CBS poll out today shows that 74 percent of Americans believe the Obama stimulus either damaged the economy or had no effect. Clearly the White House is on a different planet than the rest of the country.

In another dispatch from Planet Obama, the White House Council of Economic Advisers released a report today purporting to prove that President Obama’s stimulus has saved or created 3 million jobs and is on track to meet its goal of 3.5 million jobs by the end of this year. Where do they come up this slop?

This White House has lost all credibility on economic issues. That is why a new Washington Post poll released Tuesday again showed that a majority of Americans disapprove of President Obama’s handling of the economy.

But forget the polls and the hype emanating from the CEA. Here are the cold hard facts:

The President’s original target for jobs creation set during the campaign in the fall of 2008 was 2.5 million jobs. But as employment fell at the end of 2008, he increased the employment target by 1 million to 3.5 million jobs. At the time, employment stood at about 135.1 million, according to the DOL’s most commonly used measure. This establishes the Obama jobs target for December 2010 at 138.6 million. It also establishes a basic trajectory for employment the economy would need to approximate to hit that target.

According to the latest jobs report, total U.S. employment stood at almost 130.5 million in June, which means the cumulative Obama jobs deficit—the difference between the end target and the current employment level—stands at almost 7.4 million

The reason why unemployment is a full two points higher than the administration claimed it would be right now, and the reason they are 7.4 million jobs short of what they promised the American people, is because Government Spending Does Not Stimulate Economic Growth. All it does is move resources away from one sector of the economy away to another. And governments have a horrible track record at efficiently allocating resources. All that really happens is that, on net, jobs got destroyed in the transfer process.

The CEA is even trying to claim that private sector has responded to Obama’s spending spree with a spending spree of their own. The facts don’t support this either. Heritage fellow James Sherk reports:

Low hiring is primarily a symptom of America’s economic weakness, not its cause. Businesses did not suddenly decide to stop hiring. Rather, economic and political conditions changed in ways that discourage investment and entrepreneurship. Annual private fixed nonresidential investment has fallen by $327 billion since the recession started— a 19 percent drop. Less private investment means less hiring.

The Obama administration’s massive spending and regulatory expansion is not helping economic recovery, it is thwarting it.