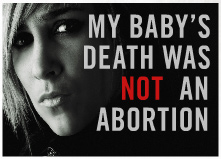 6/2/2010 – Hilary White –
“Abortion never saves a mother’s life – it just kills a baby,” says a newspaper advertisement that will appear in all of Ireland’s major papers starting today.

The Irish pro-life group Youth Defence said that the ads, which they have sponsored together with the Life Institute, are to counter implications by abortionist groups that there is no moral difference between treatment for an ectopic pregnancy and direct abortion. The ad quotes “Rene” who describes the loss of her unborn child, who implanted in her fallopian tube instead of her uterus, as “heartbreaking.”

“Now I hear pro-abortion campaigners claiming that treatment for an ectopic pregnancy is abortion,” she continues. “That’s absolutely untrue – and it’s so wrong to scare women by claiming that necessary medical treatments are abortions. I didn’t want my baby to die. And it hurts to see his death used to push for abortion.”

Youth Defence has said that abortion campaigners use the difficult situation of ectopic pregnancy and cancer of the uterus as a wedge to generate more public acceptance of abortion in strongly pro-life Ireland. The “essential” newspaper campaign, said Dr. Seán Ó Domhnaill of the Life Institute, is “cutting through the confusion – and laying the truth bare.”

The last year, he said, has seen an increase in “a particularly obnoxious piece of misinformation which attempts to frighten women into believing that a ban on abortion would endanger their lives.”

“The debate on abortion needs clarity and honesty if we are to best serve mothers and babies.”

The ads also feature comments from Prof. John Bonner, a former head of the Institute of Obstetricians and Gynaecologists, who told a Dáil Committee in 2000: “It would never cross an obstetrician’s mind that intervening in a case of pre-eclampsia, cancer of the cervix or ectopic pregnancy is abortion.

“They are not abortion as far as the professional is concerned, these are medical treatments that are essential to save the life of the mother.”

Recently, abortionist groups were frustrated by a poll that showed overwhelming public support, 70%, for maintaining Ireland’s constitutional protection for the unborn. At the same time, a recent report from the UN showed that Ireland, one of the last countries in the world to totally outlaw abortion, has one of the world’s lowest maternal mortality rates.