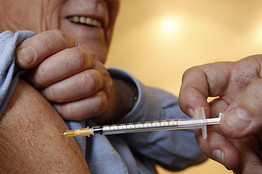 As the dean of Harvard Medical School I am frequently asked to comment on the health-reform debate. I’d give it a failing grade.

Instead of forthrightly dealing with the fundamental problems, discussion is dominated by rival factions struggling to enact or defeat President Barack Obama’s agenda. The rhetoric on both sides is exaggerated and often deceptive. Those of us for whom the central issue is health—not politics—have been left in the lurch. And as controversy heads toward a conclusion in Washington, it appears that the people who favor the legislation are engaged in collective denial.

Our health-care system suffers from problems of cost, access and quality, and needs major reform. Tax policy drives employment-based insurance; this begets overinsurance and drives costs upward while creating inequities for the unemployed and self-employed. A regulatory morass limits innovation. And deep flaws in Medicare and Medicaid drive spending without optimizing care.

Speeches and news reports can lead you to believe that proposed congressional legislation would tackle the problems of cost, access and quality. But that’s not true. The various bills do deal with access by expanding Medicaid and mandating subsidized insurance at substantial cost—and thus addresses an important social goal. However, there are no provisions to substantively control the growth of costs or raise the quality of care. So the overall effort will fail to qualify as reform.

In discussions with dozens of health-care leaders and economists, I find near unanimity of opinion that, whatever its shape, the final legislation that will emerge from Congress will markedly accelerate national health-care spending rather than restrain it. Likewise, nearly all agree that the legislation would do little or nothing to improve quality or change health-care’s dysfunctional delivery system. The system we have now promotes fragmented care and makes it more difficult than it should be to assess outcomes and patient satisfaction. The true costs of health care are disguised, competition based on price and quality are almost impossible, and patients lose their ability to be the ultimate judges of value.

Worse, currently proposed federal legislation would undermine any potential for real innovation in insurance and the provision of care. It would do so by overregulating the health-care system in the service of special interests such as insurance companies, hospitals, professional organizations and pharmaceutical companies, rather than the patients who should be our primary concern.

In effect, while the legislation would enhance access to insurance, the trade-off would be an accelerated crisis of health-care costs and perpetuation of the current dysfunctional system—now with many more participants. This will make an eventual solution even more difficult. Ultimately, our capacity to innovate and develop new therapies would suffer most of all.

There are important lessons to be learned from recent experience with reform in Massachusetts. Here, insurance mandates similar to those proposed in the federal legislation succeeded in expanding coverage but—despite initial predictions—increased total spending.

A “Special Commission on the Health Care Payment System” recently declared that the Massachusetts health-care payment system must be changed over the next five years, most likely to one involving “capitated” payments instead of the traditional fee-for-service system. Capitation means that newly created organizations of physicians and other health-care providers will be given limited dollars per patient for all of their care, allowing for shared savings if spending is below the targets. Unfortunately, the details of this massive change—necessitated by skyrocketing costs and a desire to improve quality—are completely unspecified by the commission, although a new Massachusetts state bureaucracy clearly will be required.

Yet it’s entirely unclear how such unspecified changes would impact physician practices and compensation, hospital organizations and their capacity to invest, and the ability of patients to receive the kind and quality of care they desire. Similar challenges would eventually confront the entire country on a more explosive scale if the current legislation becomes law.

Selling an uncertain and potentially unwelcome outcome such as this to the public would be a challenging task. It is easier to assert, confidently but disingenuously, that decreased costs and enhanced quality would result from the current legislation.

So the majority of our representatives may congratulate themselves on reducing the number of uninsured, while quietly understanding this can only be the first step of a multiyear process to more drastically change the organization and funding of health care in America. I have met many people for whom this strategy is conscious and explicit.

We should not be making public policy in such a crucial area by keeping the electorate ignorant of the actual road ahead.

Dr. Flier is dean of the Harvard Medical School.