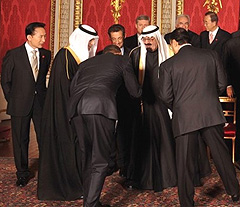 Has anyone ever seen Barack Obama publicly bow and bend his knee when meeting someone prior to yesterday? I don’t recall any photos of such a gesture of greeting, but I would be very happy if some of the President’s defenders on the left could provide such evidence that his striking body language yesterday before the monarch of Saudi Arabia and custodian of the holy cities of Mecca and Medina was simply a habitual gesture of warmth.

The old saying that one picture is worth a thousand words is actually amplified when it comes to cross-cultural communication. I have little doubt that the Muslim world’s media will not be as circumspect as their American mainstream colleagues in displaying the demi-prostration of the American leader carrying the name Hussein to the guardian of Islam’s holiest cities. 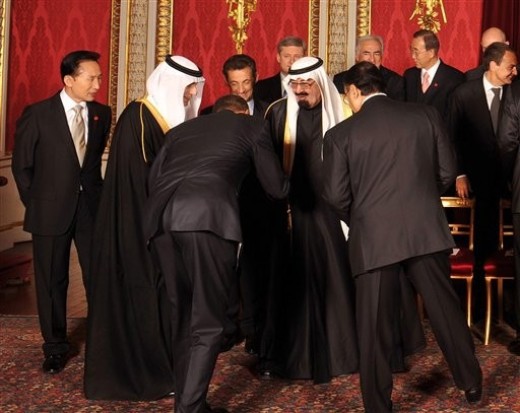 Until evidence is produced that Barack Obama habitually bows and bends his knew before others, I will have to assume that he meant this gesture to carry meaning. It is simply amazing to me that our media will not even present this image to the American public.

When meeting the Saudi King for the first time at a reception in London, the President of the United States unmistakably bowed deeply and even bent his knee. (at 1:37 in the following video)

The American mainstream media apparently paid no heed, and instead focused on Michelle Obama causally touching the Queen of England when introduced to the United Kingdom’s monarch. If anyone has seen MSM paying attention to this signal event, a traditional acknowledgement of fealty, please let me know.

If it was not a gesture of subordination, why did the Saudi King fail to respond with a similar bow?

The left wing blogs are doing their best to ridicule reaction to those who reacted in horror to body language conveying subordination and fealty. A self-identified “community college professor” on the left wing site Firedoglake uses a lot of Anglo-Saxonisms in ridiculing conservative reaction:

The wingnut attention span just isn’t that long, usually, and even by these cretins’ standards this “story” is pretty thin drool.

“Thin drool” is priceless, isn’t it? The expression is “thin gruel”, but I guess this “professor” has good reason to write under a pseudonym. There’s nothing more ridiculous than an illiterate calling others cretins.

5 thoughts on “Obama Bows Down to Saudi King”