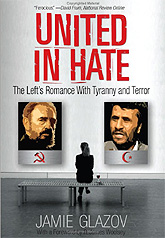 It’s a book that will make so-called “progressives” see red.

In “United in Hate: The Left’s Romance With Tyranny and Terror,” author Jamie Glazov says there’s an unholy alliance between jihadists and people like Michael Moore, Sean Penn, Ted Turner and Noam Chomsky, and, at the heart of the mutual admiration is a willingness to accept massive numbers of deaths to achieve their objectives.

What’s bound to be most infuriating to those Americans and many other westerners mentioned in the book is the way Glazov uses their own words to make the point.

While it’s hardly news that there’s cheerleading of anti-American Islamists on the left, what is news in “United in Hate” is the startling diagnosis of what is at the root of the alliance.

Glazov concludes: “This is where the Western Left and militant Islam (like the Western Left and Communism) intersect: human life must be sacrificed for the sake of the idea. Like Islamists, leftists have a Manichean vision that rigidly distinguishes good from evil. They see themselves as personifications of the former and their opponents as personifications of the latter, who must be slated for ruthless elimination.”

With both ideologies, explains Glazov, the cause is the dividing line of morality. If you are against it, you are an enemy of the people.

“We’ll ask the man, where do you stand on the question of the revolution?” explained Lenin. “Are you for it or against it? If he’s against it, we’ll stand him up against a wall.”

Lenin was serious about extermination of political enemies and others who were inconvenient to the cause of the communist revolution in the Soviet Union. But that didn’t bother western leftists who traveled there and covered up his crimes and those of his successors.

A legendary and persistent hero of the left in the U.S. to this day is Ernesto “Che” Guevara, Fidel Castro’s second in command, whose image still emblazons designer T-shirts on college campuses around the country. His life was recently celebrated in the movie “Motorcycle Diaries.”

But here’s what Guevara wrote in his book of the same name: “Crazy with fury I will stain my rifle red while slaughtering any enemy that falls into my hands! My nostrils dilate while savoring the acrid odor of gunpowder and blood. With the deaths of my enemies I prepare my being for the sacred fight and join the triumphant proletariat with a bestial howl.”

Long after Cuba’s firing squads had eliminated tens of thousands of dissidents and the gulags swallowed up the political prisoners, Glazov shows, American leftists, including many celebrities, were still holding up Cuba as the pinnacle of freedom.

Likewise, Glazov illustrates how many American leftists turned a blind eye to the potential for mass murder in Vietnam in the event of a communist victory. Few had second thoughts or expressed regrets or denunciation of the atrocities when they took place.

“Once again,” writes Glazov, “the believers did not care about the victims of their idols. In the eyes of the Left, those victims had merely gotten what they deserved – because their existence was an obstacle in the path to earthly utopia.”