Some years ago when I worked at the libertarian Cato Institute, we used to label any new hire who had not yet read “Atlas Shrugged” a “virgin.” Being conversant in Ayn Rand’s classic novel about the economic carnage caused by big government run amok was practically a job requirement. If only “Atlas” were required reading for every member of Congress and political appointee in the Obama administration. I’m confident that we’d get out of the current financial mess a lot faster.

Many of us who know Rand’s work have noticed that with each passing week, and with each successive bailout plan and economic-stimulus scheme out of Washington, our current politicians are committing the very acts of economic lunacy that “Atlas Shrugged” parodied in 1957, when this 1,000-page novel was first published and became an instant hit. 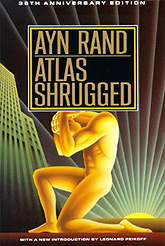 Rand, who had come to America from Soviet Russia with striking insights into totalitarianism and the destructiveness of socialism, was already a celebrity. The left, naturally, hated her. But as recently as 1991, a survey by the Library of Congress and the Book of the Month Club found that readers rated “Atlas” as the second-most influential book in their lives, behind only the Bible.

For the uninitiated, the moral of the story is simply this: Politicians invariably respond to crises — that in most cases they themselves created — by spawning new government programs, laws and regulations. These, in turn, generate more havoc and poverty, which inspires the politicians to create more programs . . . and the downward spiral repeats itself until the productive sectors of the economy collapse under the collective weight of taxes and other burdens imposed in the name of fairness, equality and do-goodism.

In the book, these relentless wealth redistributionists and their programs are disparaged as “the looters and their laws.” Every new act of government futility and stupidity carries with it a benevolent-sounding title. These include the “Anti-Greed Act” to redistribute income (sounds like Charlie Rangel’s promises soak-the-rich tax bill) and the “Equalization of Opportunity Act” to prevent people from starting more than one business (to give other people a chance). My personal favorite, the “Anti Dog-Eat-Dog Act,” aims to restrict cut-throat competition between firms and thus slow the wave of business bankruptcies. Why didn’t Hank Paulson think of that?

These acts and edicts sound farcical, yes, but no more so than the actual events in Washington, circa 2008. We already have been served up the $700 billion “Emergency Economic Stabilization Act” and the “Auto Industry Financing and Restructuring Act.” Now that Barack Obama is in town, he will soon sign into law with great urgency the “American Recovery and Reinvestment Plan.” This latest Hail Mary pass will increase the federal budget (which has already expanded by $1.5 trillion in eight years under George Bush) by an additional $1 trillion — in roughly his first 100 days in office.

The current economic strategy is right out of “Atlas Shrugged“: The more incompetent you are in business, the more handouts the politicians will bestow on you. That’s the justification for the $2 trillion of subsidies doled out already to keep afloat distressed insurance companies, banks, Wall Street investment houses, and auto companies — while standing next in line for their share of the booty are real-estate developers, the steel industry, chemical companies, airlines, ethanol producers, construction firms and even catfish farmers. With each successive bailout to “calm the markets,” another trillion of national wealth is subsequently lost. Yet, as “Atlas” grimly foretold, we now treat the incompetent who wreck their companies as victims, while those resourceful business owners who manage to make a profit are portrayed as recipients of illegitimate “windfalls.”