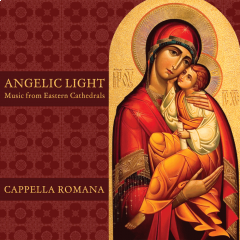 OrthodoxNet has received an advanced copy of this CD and we have listened to it many times. The hymns are magnificent and heavenly, simply amazing! We wholeheartedly recommend the “Angelic Light – Music from Eastern Cathedrals” CD from Cappella Romana. The album is available as MP3 file downloads or a traditional CD from Valley Entertainment’s website: Angelic Light – Music from Eastern Cathedrals.

“The tracks on this recording are drawn from the many CDs released by Cappella Romana, now recognized as among the top performers of Byzantine chant, particularly of medieval chant as originally arranged. The ensemble is composed of a wonderful balance of male and female voices, who not only perform Byzantine chant (and other chant forms, for that matter!) in authentic fashion as they were originally arranged, but produce a glorious and balanced sound as only a mixed ensemble can.

This recording is thematically and tonally wonderful–that is to say, that while the hymns are from a mix of feasts and the regular liturgical cycle, they all work together to convey that “angelic light,” and they do so in a manner wherein they all fit together sonically–making the listening experience transcendent. The recording flows, almost seamlessly, and that is a testament to the hymn selection by Ellen Holmes. Listen to it: you will be uplifted, you will be inspired!”
– Ben Williams, Liturgica.com