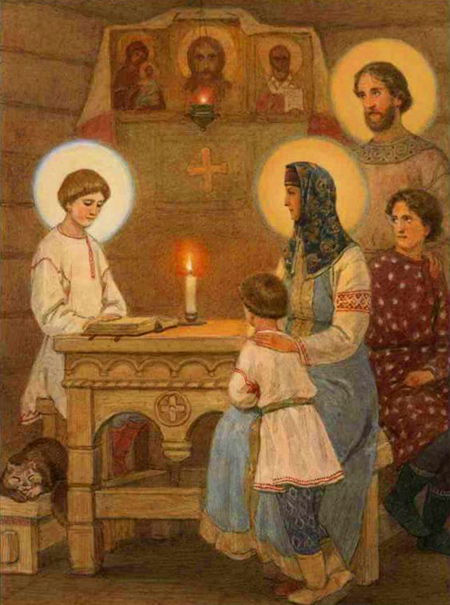 by Saint Porphyrios –
What saves and makes for good children is the life of the parents in the home. The parents need to devote themselves to the love of God. They need to become saints in their relation to their children through their mildness, patience and love. They need to make a new start every day, with a fresh outlook, renewed enthusiasm and love for their children. And the joy that will come to them, the holiness that will visit them, will shower grace on their children.

Generally the parents are to blame for the bad behaviour of the children. And their behaviour is not improved by reprimands, disciplining, or strictness. If the parents do not pursue a life of holiness and if they don’t engage in spiritual struggle, they make great mistakes and transmit the faults they have within them. If the par­ents do not live a holy life and do not display love towards each other, the devil torments the parents with the reactions of the children. Love, har­mony and understanding between the parents are what are required for the children. This provides a great sense of security and certainty.

The behaviour of the children is directly related to the state of the parents.

First Family Example
Two sisters came to see me. One of them had gone through some very distressing experiences and they asked me what was the cause of these. I answered them: “It’s because of your home; it stems from your parents.” And as I looked at the girl I said: “These are things you’ve inherited from your mother.”

“But,” she said,” my parents are such perfect people. They’re Chris­tians, they go to confession, they receive Communion and we had a re­ligious upbringing. Unless it is religion that is to blame…”

I said to them: “I don’t believe a word of all that you’re telling me. I see one thing only, and that is that your parents don’t live with the joy of Christ.”

On hearing this, the other girl said: “Listen, Maria, the Father’s quite right. Our parents go to confession and receive Holy Communion, but did we ever have any peace at home. Our father was constantly complaining about our mother. And every day either the one refused to sit at the table or the other refused to go out somewhere together. So you see what the Father is saying is true.”

“What’s your father”s name?” I asked her. She told me.

“What’s your mother’s name?” She told me.

“Well,” I said,” the feelings you’ve got inside you towards your moth­er are not at all good.”

Second Family Example
Another day a mother came to visit me with one of her daughters. She was very distressed and broke down in tears.

“I’m in total despair over my older daughter. She threw her husband out the house and deceived us all with a pack of lies.”

“What kind of lies?” I inquired.

What saves and makes for good children is the life of the parents in the home. The parents need to devote themselves to the love of God.

“She threw her husband out the house ages ago and she didn’t tell us anything. We would ask on the phone, “How’s Stelios doing?”, and she would reply, “Oh, he’s fine. He’s just gone out to buy a newspaper.” Each time she would think up some new excuse so that we wouldn’t suspect anything. And this went on for two whole years. A few days ago we learned the truth from Stelios himself when we bumped into him by chance.”

So I said to her: “The fault’s your own. It’s you that’s to blame, you and your husband, but you most of all.”

“What do you mean,” she said indignantly. “I loved my children to the point that I was never out of the kitchen. I had no life of my own at all. I took them to the church and I was always telling them the right thing to do. How can you say that I’m to blame?”

If the parents do not pursue a life of holiness and if they don’t engage in spiritual struggle, they make great mistakes and transmit the faults they have within them.

I turned to her other daughter who was with her and asked: “What do you think about the matter?”

“The Father’s right, Mom,” she said. “We never ever enjoyed a single day when you weren’t quarrelling with Dad.”

“Do you see then, how I’m right? It is you that are to blame. You traumatized the children. They are not to blame, but they are suffering the consequences.”

A psychological state is created in a child as a result of its parents that accompanies it throughout its life. Its later behaviour and its relationships with others are directly connected with the experiences that it carries with it from its childhood years. The child grows up and develops, but at bot­tom it does not change. This is manifested even in the smallest expressions of life.

For example, you get a craving for food and want to eat. You take something and eat it, then you see something else and you want that. You feel hungry and think that if you don’t eat you’ll feel faint and you’ll start to tremble. You’re afraid you’ll lose weight. This is a psychological state that has its explanation. Perhaps you never knew your father or your mother, and you feel deprived and hungry, poor and weak. And this psy­chological reality is expressed by way of reflex as a weakness of the body.

The solution is to be found through the sanctification of the parents. Become saints and you will have no problems with your children.

A large part of the responsibility for a person’s spiritual state lies with the family. For children to be released from their various inner problems it is not enough for them to receive good advice, or to be compelled by force; nor do logical arguments or threats do any good. These things rather make matters worse. The solution is to be found through the sanctification of the parents. Become saints and you will have no problems with your children. The sanctity of their parents releases the children from their problems.

Children want to have saintly people at their side, people with lots of love who will neither intimidate them nor lecture them, but who will provide a saintly example and pray for them. You par­ents should pray silently to Christ with upraised arms and embrace your children mystically. When they misbehave you will take some discipli­nary measures, but you will not coerce them. Above all you need to pray.

Parents, especially the mother, often cause hurt to a child for some act of misbehaviour by scolding it excessively. The child is then wounded. Even if you don’t scold the child outwardly but bristle with anger in­wardly or look fiercely at the child, the child understands. The child be­lieves that its mother doesn’t love it and asks, “Do you love me, Mummy?” The mother answers, “Yes, dear,” but the child is not convinced. It has been wounded. The mother loves it, she’ll caress it later, but the child will pull its head away. It refuses to be caressed, regarding this as hypocrisy because it has been wounded.
~ Saint Porphyrios