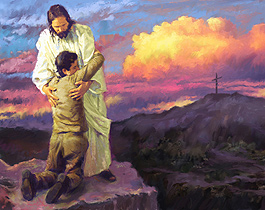 by Pope Francis –
Everything in our life, today just as in Jesus’ time, begins with an encounter.

There is a phenomenology of nostalgia, nóstos lagos, feeling called home, the experience of feeling attracted to what is most proper for us, most consonant with our being … Everything in our life, today just as in Jesus’ time, begins with an encounter. An encounter with this Man, the carpenter of Nazareth, a man like all men and yet different. The first ones, John, Andrew, and Simon, felt themselves to be looked at into their very depths, read in their innermost being, and in them sprang forth a surprise, a wonder that instantly made them feel bound to him, made them feel different …

We cannot understand this dynamic of encounter which brings forth wonder and adherence if it has not been triggered … by mercy. Only someone who has encountered mercy, who has been caressed by the tenderness of mercy, is happy and comfortable with the Lord … I dare to say that the privilege locus of the encounter is the caress of the mercy of Jesus Christ on my sin.

In front of this merciful embrace … we feel a real desire to respond, to change to correspond; a new morality arises … Christians morality is not a titanic effort of the will, the effort of someone who decides to be consistent and succeeds, a solitary challenge in the face of the world. No. Christian morality is simply a response. It is the heartfelt response to a surprising, unforeseeable, “unjust” mercy … The surprising, unforeseeable, “unjust” mercy …of one who knows me, knows my betrayals and loves me just the same, appreciates me, embraces me, calls me again, hopes in me, and expects from me. This is why the Christian conception of morality is a revolution; it is not a never falling down but an always getting up again …

Jesus is encountered, just as two thousand years ago, in a human presence, the Church, the company of those whom he assimilates to himself, his Body, the sign and sacrament of his Presence … It is a question of starting to say “You” to Christ, and saying it often. It is impossible to desire it without asking for it. And if someone starts to ask for it, then he begins to change. Besides, if someone asks for it, it is because in the depths of his being he feels attracted, called, looked at, awaited … There from the depths of my being, something attracts me toward Someone who looked for me first, is waiting for me first.