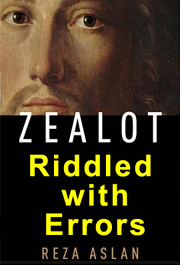 by Craig A. Evans –
There are numerous problems with Zealot, not least the fact that it heavily relies on an outdated and discredited thesis. But it also introduces a number of its own novel oddities and implausibilities. Aslan has canvassed much of the responsible scholarship in the field, but he does not always choose his options prudently. He often opts for extreme views and sometimes makes breathtaking assertions. I cannot help but wonder if Aslan’s penchant for creative writing is part of the explanation. Indeed, Zealot often reads more like a novel than a work of historical analysis.

Aslan assumes the latest possible dates for the Gospels and Acts, dating Mark after A.D. 70, Matthew and Luke-Acts in the 90s (perhaps later), and John somewhere between 100 and 120. After assigning such late dates he declares that there is no tradition of eyewitness accounts (without engaging Richard Bauckham’s important book on this subject, Jesus and the Eyewitnesses). The circularity of this reasoning is hard to miss.

Zealot is riddled with errors, probable errors, and exaggerations. Aslan tells us a builder in Nazareth had “little to do.” Excavations at Nazareth and nearby Sepphoris suggest otherwise. Being a builder (or “carpenter”) meant that “Jesus would have belonged to the lowest class of peasants in first-century Palestine.” Where does this come from? Sepphoris, a major city of Galilee, is said to be “a day’s walk” from Nazareth. Actually, it takes a jogger about 45 minutes. Scholars will be surprised to learn that the first-century Jewish prophet Jesus ben Ananias, mentioned by the historian Josephus, prophesied the “imminent return of the messiah.” He did no such thing.

Aslan would have us believe that in an interval of one or two years (the time Jesus spent with John the Baptist) Galilee had become “urbanized, Hellenized, iniquitous.” Previously it had been a place of family farms, open fields, and blooming orchards. Excavations at Sepphoris indicate that even this large, somewhat Hellenized city had not adopted foods and customs contrary to Jewish law and traditions in the time of Jesus. In fact, excavations throughout Galilee have revealed how faithful to the law of Moses the people were. When Jesus commands the cleansed leper to show himself to the village priest and do as Moses commanded, Aslan thinks “Jesus is joking.” And his discussion of magic and miracles is confusing and inconsistent.

There are further mistakes. Aslan consistently mishandles the Greek term for “apostles.” He assigns Eusebius to the third century, but the Christian apologist and historian flourished in the fourth century. He assumes throughout that Jesus and his disciples were illiterate (pg. 171: “they could neither read nor write”; pg. 178: “illiterate peasants from the backwoods of Galilee”). There is no engagement with scholarship that suggests otherwise. We are also told that James, the brother of Jesus, wore “simple garments made of linen, not wool.” But linen was worn by the wealthy (see Luke 16:19), not the poor and simple.

Reader Beware
The real problem of Zealot is seen in its exaggeration of the differences between Paul and the original apostles. There is no question that Paul sharply disagreed with Peter and other leaders over the question of the role of the law of Moses in the lives of non-Jewish converts. Aslan would have his readers believe that the debate centered on Christology, the divinity of Jesus, rather than on Ecclesiology, life in the church. But the debate as described in the book of Acts and in Paul’s letters (especially Galatians) centers on food laws, Sabbath observance, and circumcision, not on the divinity of Jesus. Aslan would have done well to consult theologian David Wenham (author of Paul and Jesus) and others who show the misguided nature of claims that Paul invented Christianity.

Recent media coverage has drawn attention to Aslan’s Muslim heritage. As he himself explains, he was raised as a nominal Muslim, became a fundamentalist Christian as a teenager, and then abandoned his new faith after being exposed to biblical and historical criticism in his later education. Aslan earned a PhD in sociology and is now a professor of creative writing. I see nothing in his book that reflects distinctive Islamic beliefs about Jesus. The Qur’an, for example, explicitly asserts that Jesus was not executed, but rather one like him (Simon of Cyrene, who assisted Jesus in carrying the cross). Aslan contradicts this strange teaching (which apparently originated with the second-century heretic Basilides), rightly emphasizing the reality and brutality of Jesus’ death on a Roman cross.

At points Aslan’s book is informative; it is often entertaining. But it is also rife with questionable assertions. Let the reader beware.