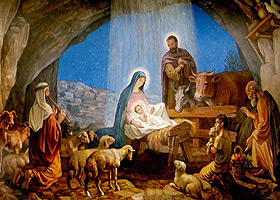 by Ray Nothstine –
Every December cultural warriors mourn the incessant attacks on Christmas and secularism’s rise in society. News headlines carry stories of modern day Herods banning nativity scenes, religious performances, and even the word “Christmas.” Just as a majority of young people profess they will have less prosperity and opportunity than their parents, many people now expect less out of Christmas. Continual bickering over holiday messaging in corporate advertising itself points to a shrinking and limited Christmas.

Yet these problems are signs on the way to important truths, if we have the eyes to see. Record spending and debt, whether in Washington or the home, allude to a society trying to fill an emptiness of the heart. Even our disappointment in poor leadership in America reminds us that we crave a true King and are expectant of a greater day.

Part of the cause of the rise of secularism and a less meaningful Christmas is that we have lost this spirit of expectancy. Advent not only points to preparation for and celebration of the Nativity but also to the second coming of Christ. The New Testament ends with anticipation of Christ’s return: “He who testifies to these things says, ‘Yes, I am coming soon.’ Amen. Come, Lord Jesus.” (Rev 22:20) In their lifetime, the apostles lived in anticipation and excitement for the return of Christ.

What Christmas actually announces to the world offends modern sensibilities. The mystery and depth of the incarnation seems unfathomable. Praising Christmas carols, G.K. Chesterton noted, “It is extraordinary to notice how completely this feeling of the paradox of the manger was lost by the brilliant and ingenious theologians, and how completely it was kept in the Christmas carols. They, at least, never forgot that the main business of the story they had to tell was that the absolute once ruled the universe from a cattle stall.”

Christmas has united much of the world and is responsible for the common identity of the West and its rise out of barbarism. “In adoring the birth of our Savior, we find ourselves celebrating our own nativity; for the birth of Christ is the birth of the Christian people,” declared Leo the Great.

Christmas reminds us of the shortcomings of man and what God has accomplished and done to intercede on our behalf. It’s a reminder of our sinful nature and it’s not simply a great holiday or time of joy for the unrepentant.

While our culture faces new hostilities to the Christmas message, the real culprit is indifference to its greater meaning and a lack of appreciation of its power on the part of believers. It has always been the task of believers to transcend the secular culture.

Modern Herods, rising secularism, materialism, and a host of political problems may combine to rob Christmas of its meaning, but it’s a futile effort in the face of faithfulness. Unfortunately, many this Christmas will try to fulfill their desires through acquiring more and politicians will promise and spend more in hopes of attaining worldly recognition and building a better society through debt.

But the true gift and hope of the world can only be received and not acquired. That’s the Christmas message. In his beautiful hymn, “Come thou Long Expected Jesus,” Charles Wesley simply called Christ the “desire of every nation” and “joy of every longing heart.” It’s a timeless message and one that is not made less true or powerful by cultural secularism. A world devoured by political failings, materialism, and economic and moral bankruptcy only points to a desire and need for the real Savior. In the words of Isaiah:

2 thoughts on “Christmas and Secularism’s Futility”