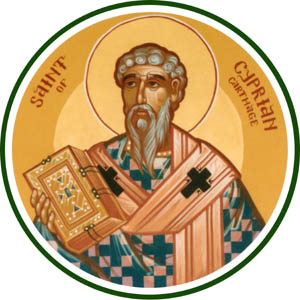 by Fr. Brian Mullady, OP –
There are those who despair and have no hope when things do not go their way in the political order. This cannot be a Christian attitude.
“The world itself now bears witness to its approaching end by its fading powers. […] The peasant is failing and disappearing from the fields, the sailor at sea, the soldier in the camp, uprightness in the forum, justice in the court, concord in friendships, skill in the arts, discipline in morals.”

At the time, the Christians thought that the world was coming to an end as they knew it. Yet St. Cyprian, as all good Christians, was not moved to despair. This is because Christians realize that history in a sense has already come to an end. When Christ rose from the dead and ascended into heaven, the whole purpose for the world was realized: God was finally glorified in Jesus Christ.

The only thing left is to fill up the perfect number of those whom God has chosen to see him in the face through the action of Christ.

Once we realize that the final realization of the world cannot occur on this earth, then — though one must be involved in what happens here, as this is our pilgrim road to heaven — looking at time from eternity is the only thing that makes sense.

There are those who despair and have no hope when things do not go their way in the political order. This cannot be a Christian attitude. If it is true that our final fatherland is only in heaven, then each society here must be of concern to us — but the Christian cannot put his hope here. His hope is centered only in God.

After all, though Christ has redeemed the world, human beings still suffer from the weakness of ignorance, malice and lust that characterized original sin. People are still sadly motivated by the “desire to dominate,” which is the origin of all lust and its final expression.

The Christian has many options to demonstrate his final hope and interest in the solution to the problem of man.

All is not lost when political factions succeed in introducing legally sanctioned injustice into a state. The Christian has many options to demonstrate his final hope and interest in the solution to the problem of man. He may seek to promote virtue in the context for which he is most responsible: the family, the shop or the local community. In this he affirms the principle of subsidiarity: that small is beautiful, and it is not the function of the higher community to usurp the lower. He may redouble his efforts in his context to promote a culture of life.

The corporal works of mercy, which have in some ways been abandoned by some Christians and left to the state or bureaucracies, are a marvelous way to strengthen the life of hope and grace for individuals and society. The Christian may also become more involved in the political process. This can be by studying the issues more to be a more responsible member of society or outright participation in holding office.

The Church has seemed to be asleep for a long time regarding the dangers to limiting the freedom of Catholics’ religious practice.  Fortunately, more and more Catholics are becoming alive to the real possibility of dictation by the state concerning our practice of religious freedom.  This can and should alarm anyone who is serious about allowing his or her religious faith to influence his or her participation in the public square.

Freedom cannot be license.  It must respect the inalienable rights of man, which must, for example, include life.

Just because Christians hope in God does not mean that they are freed from concern and action in the civil order.  Still, in the final analysis, this hope is the only thing that can serve.  During his life, St. Augustine was not only a bishop; he was also a civil magistrate.  When he was dying, his city of Hippo was being besieged by the Vandals, particularly nasty barbarians who would eventually capture and destroy all he had worked for.  On his deathbed, he insisted that the walls be covered with verses from the Psalms so he could think about God.

St. Augustine was not daunted by the fact that the world as he knew it was passing, for he had hope in heaven.  This had guided all his actions on earth and now was his final consolation.  As he said of heaven: “There we shall rest and see; see and love; love and praise.  This is what shall be in the end without end” (Augustine, City of God, Book 22, c. 30).

1 thought on “Hope in God, Do Not Despair”