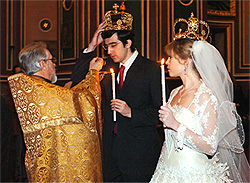 by Ken McIntyre –
The collapse of marriage, along with a dramatic rise in births to single women, is the most important cause of childhood poverty—but government policy doesn’t reflect that reality, according to a special report released today by The Heritage Foundation.

Nearly three out of four poor families with children in America are headed by single parents. When a child’s father is married to his mother, however, the probability of the child’s living in poverty drops by 82 percent.

Robert Rector, Heritage’s senior research fellow in domestic policy, provides a brief overview of each state with unique data and 14 charts per state, while also updating his years of related research in the special report titled “Marriage: America’s Greatest Weapon Against Child Poverty.” Heritage’s study, including a national charts slideshow, arrives a week before the Census Bureau’s annual report on poverty, which is expected to show another increase.

“Policymakers on the state and national levels recognize that education reduces poverty, but they’re largely unaware that marriage is an equally strong anti-poverty weapon,” says Rector, a nationally recognized authority on the U.S. welfare system. (continues below chart) In Florida, for example, white families headed by single parents are five times more likely to be poor than those headed by married couples. In Illinois, the poverty rate for a single mother with only a high school diploma is 39.5 percent, compared with 8 percent for a married couple with the same education.

The rate of births to unmarried women—now four out of every 10 babies overall, five out of 10 for Hispanics, and seven out of 10 for blacks—has soared since the mid-1960s, when President Lyndon Johnson launched the War on Poverty. Births outside marriage are mostly to less-educated women—sadly, those with the least ability to support children.

While more Americans grow dependent on welfare, government fails to communicate the benefits of marriage even as it warns young people not to smoke, do drugs, have “unsafe” sex, or drop out of school. Rector calls this “tragic.”

Well over a third of all single-parent families with children (37 percent) were poor in 2009. Only 6.8 percent of married couples with children were poor. Marriage reduces the probability of poverty for all racial groups.

Rector finds a silver lining: Most unmarried moms—and dads, too—do look favorably on marriage. “New policies should be developed that build on these attitudes,” he says. Specifically, government should:

Marriage is the Strongest Factor in Reducing Child Poverty in the U.S.

Over a third of single-parent families with children are poor, compared to only seven percent of married families. Overall, children in married families are 82 percent less likely to be poor than are children of single parents. The strong impact of marriage in reducing poverty still appears when married and non-married families of the same race and education level are compared.

Around three quarters of means-tested welfare assistance to families with children goes to single parents. In 2011, government spent roughly $330 billion providing cash, food, housing, medical care, and social services to poor and low income single parents. On average, the annual cost of benefits came to around $30,000 per family.

Most poor children live in single-parent families. Seventy-one percent of poor families with children are headed by single parents, mostly single mothers. Compared to children raised in an intact family, children raised in single-parent homes are more likely to have emotional and behavioral problems; be physically abused; smoke, drink, and use drugs; be aggressive; engage in violent, delinquent, and criminal behavior; have poor school performance; and drop out of high school.

Rising non-marital births leads to increased poverty. In 2010, 41 percent of children were born outside marriage, up from roughly 5 percent in 1960. Children born to unmarried women are very likely to live in persistent poverty.

Low income non-married parents value marriage. However, they have often lack understanding of the importance of having a strong, married family structure before bringing children into the world, and they lack the skills for healthy marriage. The sequence for most low-income mothers is child first, marriage later, which generally leads to negative social and economic outcomes.

Solutions: Marriage and Child Poverty. First, government and culture must clearly communicate the critical importance of marriage to reducing future poverty and other social ills. Second, youth at risk of becoming unwed parents deserve knowledge and skills to prepare them for the task of bearing and raising children. Third, welfare should be changed to encourage rather than penalize marriage, as the current system does.