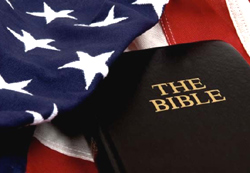 by Rabbi Aryeh Spero –
Who would have expected that in a Republican primary campaign the single biggest complaint among candidates would be that the front-runner has taken capitalism too far? As if his success and achievement were evidence of something unethical and immoral? President Obama and other redistributionists must be rejoicing that their assumptions about rugged capitalism and the 1% have been given such legitimacy.

More than any other nation, the United States was founded on broad themes of morality rooted in a specific religious perspective. We call this the Judeo-Christian ethos, and within it resides a ringing endorsement of capitalism as a moral endeavor.

Regarding mankind, no theme is more salient in the Bible than the morality of personal responsibility, for it is through this that man cultivates the inner development leading to his own growth, good citizenship and happiness. The entitlement/welfare state is a paradigm that undermines that noble goal.

Yet capitalism is not content with people only being laborers and holders of jobs, indistinguishable members of the masses punching in and out of mammoth factories or functioning as service employees in government agencies. Nor is the Bible. Unlike socialism, mired as it is in the static reproduction of things already invented, capitalism is dynamic and energetic. It cheerfully fosters and encourages creativity, unspoken possibilities, and dreams of the individual. Because the Hebrew Bible sees us not simply as “workers” and members of the masses but, rather, as individuals, it heralds that characteristic which endows us with individuality: our creativity.

At the opening bell, Genesis announces: “Man is created in the image of God”—in other words, like Him, with individuality and creative intelligence. Unlike animals, the human being is not only a hunter and gatherer but a creative dreamer with the potential of unlocking all the hidden treasures implanted by God in our universe. The mechanism of capitalism, as manifest through investment and reasoned speculation, helps facilitate our partnership with God by bringing to the surface that which the Almighty embedded in nature for our eventual extraction and activation.

Capitalism makes possible entrepreneurship, which is the realization of an idea birthed in human creativity. Whereas statism demands that citizens think small and bow to a top-down conformity, capitalism, as has been practiced in the U.S., maximizes human potential. It provides a home for aspiration, referred to in the Bible as “the spirit of life.”

The Bible speaks positively of payment and profit: “For why else should a man so labor but to receive reward?” Thus do laborers get paid wages for their hours of work and investors receive profit for their investment and risk.

The Bible is not a business-school manual. While it is comfortable with wealth creation and the need for speculation in economic markets, it has nothing to say about financial instruments and models such as private equity, hedge funds or other forms of monetary capitalization. What it does demand is honesty, fair weights and measures, respect for a borrower’s collateral, timely payments of wages, resisting usury, and empathy for those injured by life’s misfortunes and charity.

It also demands transparency and honesty regarding one’s intentions. The command, “Thou shalt not place a stumbling block in front of the blind man” also means that you should not act deceitfully or obscure the truth from those whose choice depends upon the information you give them. There’s nothing to indicate that Mitt Romney breached this biblical code of ethics, and his wealth and success should not be seen as automatic causes for suspicion.

No country has achieved such broad-based prosperity as has America, or invented as many useful things, or seen as many people achieve personal promise. This is not an accident. It is the direct result of centuries lived by the free-market ethos embodied in the Judeo-Christian outlook.

Furthermore, only a prosperous nation can protect itself from outside threats, for without prosperity the funds to support a robust military are unavailable. Having radically enlarged the welfare state and hoping to further expand it, President Obama is attempting to justify his cuts to our military by asserting that defense needs must give way to domestic programs.

Both history and the Bible show the way that leads. Countries that were once economic powerhouses atrophied and declined, like England after World War II, once they began adopting socialism. Even King Solomon’s thriving kingdom crashed once his son decided to impose onerous taxes.

At the end of Genesis, we hear how after years of famine the people in Egypt gave all their property to the government in return for the promise of food. The architect of this plan was Joseph, son of Jacob, who had risen to become the pharaoh’s top official, thus: “Joseph exchanged all the land of Egypt for pharaoh and the land became pharaoh’s.” The result was that Egyptians became indentured to the ruler and state, and Joseph’s descendants ended up enslaved to the state.

Many on the religious left criticize capitalism because all do not end up monetarily equal—or, as Churchill quipped, “all equally miserable.” But the Bible’s prescription of equality means equality under the law, as in Deuteronomy’s saying that “Judges and officers . . . shall judge the people with a just judgment: Do not . . . favor one over the other.” Nowhere does the Bible refer to a utopian equality that is contrary to human nature and has never been achieved.

The motive of capitalism’s detractors is a quest for their own power and an envy of those who have more money. But envy is a cardinal sin and something that ought not to be.

God begins the Ten Commandments with “I am the Lord your God” and concludes with “Thou shalt not envy your neighbor, not for his wife, nor his house, nor for any of his holdings.” Envy is corrosive to the individual and to those societies that embrace it. Nations that throw over capitalism for socialism have made an immoral choice.

Rabbi Spero has led congregations in Ohio and New York and is president of Caucus for America.