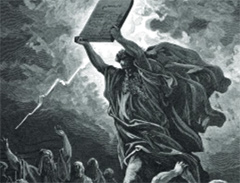 by Larry Elder –
As a candidate for the presidency, George W. Bush took heat for supposedly saying something like, “God wanted me to become president.” He never said that. But no matter. Here comes another yet another Bible-banging religious conservative “taking his marching orders from God.” Apparently, if you feel God endorses a particular path, God wants you to keep the news to yourself.

Religion, to many liberals, is a sign of weakness, a demonstration of the inability to reason for oneself. With the Bible telling him what to do, how to think, what to believe — why, such a person is downright scary. Recall Obama explaining how small-town Midwesterners deal with difficult economic times: “They get bitter,” as the then-presidential candidate put it. “They cling to guns or religion or antipathy toward people who aren’t like them … as a way to explain their frustrations.”

When, however, the left uses religion to justify expanding the Welfare State, well, invoking God becomes perfectly acceptable. During the last National Prayer Breakfast, for example, CNN’s Wolf Blitzer praised how “movingly” Obama spoke about the way his religion informs his policies.

Take Los Angeles Times columnist David Lazarus. In a recent column, he uses religion to denounce those who oppose ObamaCare: “These critics seldom acknowledge other aspects of the law aimed at helping insure some of the roughly 50 million people in this country who now lack coverage. That’s an act of pure selfishness. … It’s also a display of heartlessness unbefitting a country that claims to define itself by love-thy-neighbor Judeo-Christian values.” (Emphasis added.)

Judeo-Christian values? In caring for the needy, scripture dictates that The State supplant individuals, community, houses of worship and other nonprofits in helping care for the needy?

Tell this to the Rev. Robert Sirico, of the free-market think tank Acton Institute. Whether arguing for government programs like Medicare, Medicaid or even Social Security, the first question to ask is a moral one: Does turning the business of compassion over to the state harm us as a society and damage us in ways proponents fail to consider?

“Is it right that the young be taxed to enable the government to provide a generous retirement program for able-bodied older people? What are the social and moral implications of this idea?

“The very existence of Social Security has convinced tens of millions of people that government-mandated savings are utterly necessary for security in our later years.

“The cultural effects are profound. Before Social Security was created in the late 1930s, it would have been equally crazy to suggest that the government provide a secure and stable income for the aged by siphoning from their paychecks in the early years. Indeed, the program has had a profound effect on the way we view the role of government in society.

“Just as parents care for their young now, it was once well understood that the middle-aged have a moral responsibility to care for their aging parents. This establishes a social link between the generations, an interdependency which is essential for the continuity of values and habits of a mature people.

“Social Security has also contributed to the crowding out of private charity, an old and very serious problem associated with all state benefits. Why should private associations bother to solve social problems widely understood to be the responsibility of government?

“The great tragedy of our age is that we have forgotten how to imagine the practical workings of a free and virtuous society. We have lost faith in our ability to solve difficult social problems on our own and have instead transferred our faith to public officials to solve our problems for us.”

In 1900, according to the Tax Foundation, government — state, local, federal — took 6 percent of the people’s income. Today, when one puts a price on government-imposed regulation, the amount taken by government is over 40 percent. And this ignores the real cost to society — that of turning over to the state a function that could, should and would be done more efficiently and humanely by people helping people.