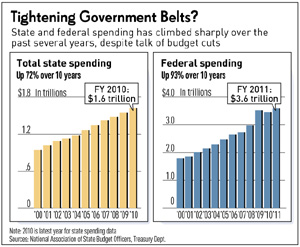 by John Merline –
When Republicans took control of the House in January, they pledged to make deep cuts in federal spending, and in April they succeeded in passing a bill advertised as cutting $38 billion from fiscal 2011’s budget. Then in August, they pushed for a deal to cut an additional $2.4 trillion over the next decade.

Some analysts have blamed these spending cuts for this year’s economic slowdown.

But data released by the Treasury Department on Friday show that, so far, there haven’t been any spending cuts at all.

Higher Spending, Deficits
In fact, in the first nine months of this year, federal spending was $120 billion higher than in the same period in 2010, the data show. That’s an increase of almost 5%. And deficits during this time were $23.5 billion higher.

These spending hikes haven’t stopped many analysts from claiming that the country is in an age of budget austerity, one that’s hurting economic growth.

A July article in USA Today, for example, claimed that “Already in 2011, softer government spending has sapped growth.”

Jared Bernstein, former chief economic adviser to Vice President Biden, wrote over the summer that “government spending cutbacks have been a large drag on growth in recent quarters and have led to sharp losses in state and local employment.”

Economist and New York Times columnist Paul Krugman argued in September that “the turn toward austerity (is) a major factor in our growth slowdown.”

If government spending is related to growth, as these and others claim, then the economy presumably should be growing faster, not slower, given the current higher rates of federal outlays.

State Spending Higher Too
Nor does the claim that state governments sharply cut spending stand up well to closer scrutiny.

Overall state spending continued to climb right through the recession, when all money from state general funds and other funds, federal grants and state bonds is combined.

Total state outlays in 2010 were almost 10% higher than in 2008, according to the National Association of State Budget Officers’ annual State Expenditure Report.

And general fund spending — which makes up about 40% of total state spending — is expected to climb 5.2% in 2011 and 2.6% next year, according to the association’s latest survey.

NASBO says that states were able to sustain spending growth through 2010 only because the federal government was pumping more money in via the $830 billion stimulus, and that these funds are now all but exhausted.