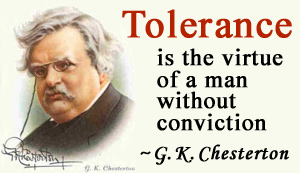 by Jennifer Hartline –
Judge not me nor anything I say, do, or want, lest ye be judged intolerant

The Gospel of Tolerance really only has one rule: thou shalt tolerate any action, belief, lifestyle, agenda, and person except the person who believes a certain lifestyle, action or agenda is wrong and has the gall to say so out loud. The real goal here is not acceptance but submission. It’s not enough to “get along” or tolerate quietly. You must approve. You don’t dare disapprove publicly. Those who don’t tow the line will be punished. …

Stacy Trasancos is one gutsy Catholic.  Last week she wrote a little blog post about how she’s getting tired of wondering “what in tarnation we’re going to encounter” every time she and her kids leave the house.  Two men ogling each other at the pool?  Two women engaged in public displays of affection in the park?  These are scenes she’d rather her young children not be exposed to every time they go out in public, but it’s become impossible to avoid in her community.

For having the nerve to express her objection to immorality, she’s become the object of wrath and nasty threats from homosexual activists. Those who understand how Stacy feels (count me in) also know that her real crime is that she has rejected the Gospel of Tolerance.

The Gospel of Tolerance requires that you have no objection to that which it says must be tolerated.

The Gospel of Tolerance really only has one rule: thou shalt tolerate any action, belief, lifestyle, agenda, and person except the person who believes a certain lifestyle, action or agenda is wrong and has the gall to say so out loud.  The Gospel of Tolerance requires that you have no objection to that which it says must be tolerated.  In fact, it requires that you not even question that which it says must be tolerated.

Noncompliance will not be tolerated.

Those who preach this gospel have fashioned a “christianity” more to their liking, since the real thing cannot be tolerated.  Theirs is a toothless kitten; soft, warm, cuddly, sleepy and sentimental.  Its only purpose is to soothe and affirm.  It makes no demands.  It certainly will not tolerate any demands forthcoming!

If their christianity has a savior at all, he is merely an amiable, sympathetic mascot for their cause and the only thing he ever said was “Don’t judge.”  The only “sin” to require forgiving is the sin of intolerance, which of course is only committed by those who object to being told what they can and can’t object to.

Those who preach this gospel have fashioned a “christianity” more to their liking, since the real thing cannot be tolerated.

The Gospel of Tolerance is a ruse; it’s just a marketing ploy.  The real goal here is submission.  It’s not enough to “get along” or tolerate quietly.  You must approve. You don’t dare disapprove publicly.  Those who don’t tow the line will be punished.

Just ask the teachers who’ve been suspended for expressing opposition to gay “marriage.”  Or the Catholic health care facilities being told they must dispense contraception against their explicit beliefs; or the Catholic adoption agencies that must close down to avoid being forced to place children with homosexual couples against their explicit beliefs (beliefs they’re supposed to have the freedom to live by).

Ask the business owners now fighting lawsuits because they don’t wish to participate in gay weddings or receptions. When did they lose the right to run their own business as they wish?  Under the Gospel of Tolerance, there is no freedom to disagree, no right to object.  You must submit.  Either carry the banner or risk losing your livelihood and liberty.

Well here’s a radical piece of truth for you:  tolerance is not a virtue. It’s not a moral victory to acquiesce to evil.

“We need to remember that tolerance is not a Christian virtue. Charity, justice, mercy, prudence, honesty — these are Christian virtues. And obviously, in a diverse community, tolerance is an important working principle. But it’s never an end in itself. In fact, tolerating grave evil within a society is itself a form of serious evil.” – Archbishop Chaput

It’s not intolerant to make the judgment that something is morally wrong and oppose it.  Just as sex does not equal love, neither does tolerance!  There is such a thing as sin, and it leads to death, and Love demands that we tell our brothers and sisters the truth so that they might decide to reject sin and gain life.

Christians now find themselves in the sobering territory of the new Dark Ages, when evil is called good and darkness is called light. (Isaiah 5:20)

Well, I’m with Stacy. I’ve had it with all this darkness parading around as light, being championed by the government, paid for with my tax dollars, shoved in my face and my children’s faces and rammed down our throats. I’m tired of being branded a hateful bigot for not abandoning the moral truths that have been the foundation of the human race since time began. And frankly I couldn’t care less if you find that intolerant.

I find it intolerable that our children’s innocence is being ripped away from them beginning in Kindergarten with the new mandate of Sex-Ed that indoctrinates them into embracing and celebrating homosexuality, trans-sexuality, gender-neutral insanity, every imaginable manner of promiscuity and abortion. It’s intolerable that our kids are seen as “sexual beings” rather than human souls.

It is intolerable that my children will probably not be able to make it to puberty without learning about sodomy and “gay marriage.” It is intolerable that before they can even drive a car they will also be convicted of intolerance if they dare to defend true marriage and sexual purity. It’s intolerable that they are growing up in a culture that defiles marriage, corrupts the family, perverts sexuality and destroys human life.

The irony is that because I believe that babies in the womb have the right to live and be born and children have the right to a mother and a father who are married to each other and that sex is sacred and beautiful and should be treated accordingly and that marriage only exists between a man and a woman because that is God’s plan for the human family, I’m the one who’s called an enemy of freedom and human rights and an intolerant bigot.

Then so be it. Far better to be called intolerant than to call evil good.

One last thought – I recently read someone’s description of people who were “good Christians” and it boiled down to this: good Christians are tolerant of others. There’s that cuddly, feel-good christianity again.

Find your courage, people. The false gospel of tolerance is not our salvation and it will not bring us peace. There is Good News to share and we have to live it without fear!

3 thoughts on “The ‘Gospel’ of Tolerance: You Must Approve”