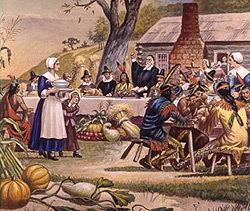 by John Stossel –
Had today’s political class been in power in 1623, tomorrow’s holiday would have been called “Starvation Day” instead of Thanksgiving. Of course, most of us wouldn’t be alive to celebrate it.

Every year around this time, schoolchildren are taught about that wonderful day when Pilgrims and Native Americans shared the fruits of the harvest. But the first Thanksgiving in 1623 almost didn’t happen.

Long before the failure of modern socialism, the earliest European settlers gave us a dramatic demonstration of the fatal flaws of collectivism. Unfortunately, few Americans today know it.

The Pilgrims at Plymouth Colony organized their farm economy along communal lines. The goal was to share the work and produce equally. That’s why they nearly all starved.

When people can get the same return with less effort, most people make less effort. Plymouth settlers faked illness rather than working the common property. Some even stole, despite their Puritan convictions. Total production was too meager to support the population, and famine resulted. This went on for two years.

“So as it well appeared that famine must still ensue the next year also, if not some way prevented,” wrote Gov. William Bradford in his diary. The colonists, he said, “began to think how they might raise as much corn as they could, and obtain a better crop than they had done, that they might not still thus languish in misery. At length after much debate of things, [I] [with the advice of the chiefest among them] gave way that they should set corn every man for his own particular, and in that regard trust to themselves. And so assigned to every family a parcel of land.”

In other words, the people of Plymouth moved from socialism to private farming. The results were dramatic.

“That which is common to the greatest number has the least care bestowed upon it.”

“This had very good success,” Bradford wrote, “for it made all hands very industrious, so as much more corn was planted than otherwise would have been. By this time harvest was come, and instead of famine, now God gave them plenty, and the face of things was changed, to the rejoicing of the hearts of many.”

Because of the change, the first Thanksgiving could be held in November 1623.

What Plymouth suffered under communalism was what economists today call the tragedy of the commons. The problem has been known since ancient Greece. As Aristotle noted, “That which is common to the greatest number has the least care bestowed upon it.”

If individuals can take from a common pot regardless of how much they put in it, each person has an incentive to be a free-rider, to do as little as possible and take as much as possible because what one fails to take will be taken by someone else. Soon, the pot is empty.

What private property does — as the Pilgrims discovered — is connect effort to reward, creating an incentive for people to produce far more. Then, if there’s a free market, people will trade their surpluses to others for the things they lack. Mutual exchange for mutual benefit makes the community richer.

Here’s the biggest irony of all: The U.S. government has yet to apply the lesson to its first conquest, Native Americans.

The U.S. government has held most Indian land in trust since the 19th century. This discourages initiative and risk-taking because, among other reasons, it can’t be used as collateral for loans.

When producers know their future products are safe from confiscation, they take risks and invest.

On Indian reservations, “private land is 40 to 90 percent more productive than land owned through the Bureau of Indian Affairs,” says economist Terry Anderson, executive director of PERC. “If you drive through western reservations, you will see on one side cultivated fields, irrigation, and on the other side, overgrazed pasture, run-down pastures and homes. One is a simple commons; the other side is private property. You have Indians on both sides. The important thing is someone owns one side.”

Secure property rights are the key. When producers know their future products are safe from confiscation, they take risks and invest. But when they fear they will be deprived of the fruits of their labor, they will do as little as possible.

That’s the lost lesson of Thanksgiving.