In early September, I began noticing a string of news stories about scientists rejecting the orthodoxy on global warming. Actually, it was more like a string of guest columns and long letters to the editor since it is hard for skeptical scientists to get published in the cabal of climate journals now controlled by the Great Sanhedrin of the environmental movement.

Still, the number of climate change skeptics is growing rapidly. Because a funny thing is happening to global temperatures — they’re going down, not up.

On the same day (Sept. 5) that areas of southern Brazil were recording one of their latest winter snowfalls ever and entering what turned out to be their coldest September in a century, Brazilian meteorologist Eugenio Hackbart explained that extreme cold or snowfall events in his country have always been tied to “a negative PDO” or Pacific Decadal Oscillation. Positive PDOs — El Ninos — produce above-average temperatures in South America while negative ones — La Ninas — produce below average ones.

Dr. Hackbart also pointed out that periods of solar inactivity known as “solar minimums” magnify cold spells on his continent. So, given that August was the first month since 1913 in which no sunspot activity was recorded — none — and during which solar winds were at a 50-year low, he was not surprised that Brazilians were suffering (for them) a brutal cold snap. “This is no coincidence,” he said as he scoffed at the notion that manmade carbon emissions had more impact than the sun and oceans on global climate. 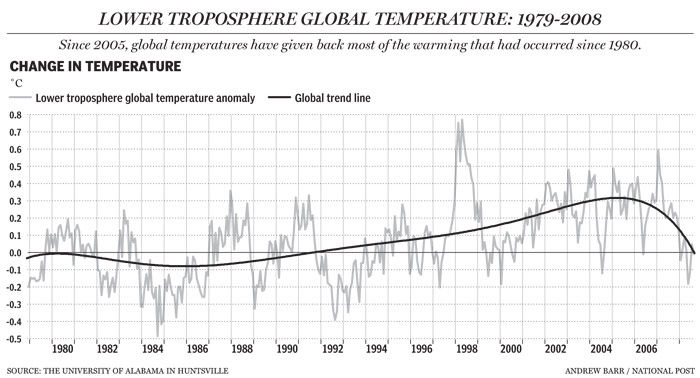 Also in September, American Craig Loehle, a scientist who conducts computer modelling on global climate change, confirmed his earlier findings that the so-called Medieval Warm Period (MWP) of about 1,000 years ago did in fact exist and was even warmer than 20th-century temperatures.

Prior to the past decade of climate hysteria and Kyoto hype, the MWP was a given in the scientific community. Several hundred studies of tree rings, lake and ocean floor sediment, ice cores and early written records of weather — even harvest totals and censuses –confirmed that the period from 800 AD to 1300 AD was unusually warm, particularly in Northern Europe.

For nearly 30 years, Professor Christy has been in charge of NASA’s eight weather satellites that take more than 300,000 temperature readings daily around the globe. In a paper co-written with Dr. Douglass, he concludes that while manmade emissions may be having a slight impact, “variations in global temperatures since 1978 … cannot be attributed to carbon dioxide.”

Moreover, while the chart below was not produced by Douglass and Christy, it was produced using their data and it clearly shows that in the past four years — the period corresponding to reduced solar activity — all of the rise in global temperatures since 1979 has disappeared.